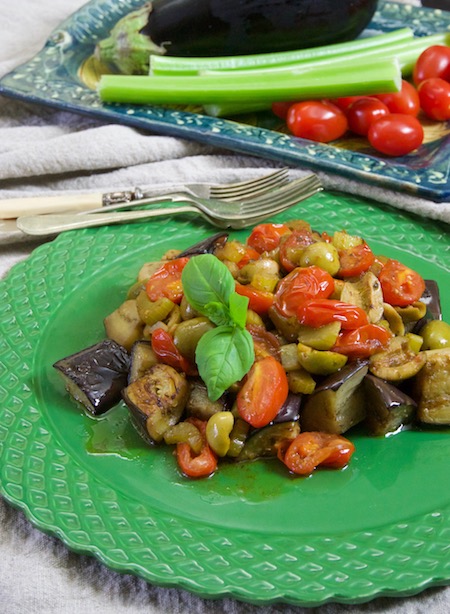 Following on from the last post MY AEOLIAN ADVENTURE about my week spent in Sicily and the Aeolian Islands with Aeolian Adventures , this post is about my new found love affair with agrodolce, the sweet and sour flavour found in so many of the dishes I tasted there.

Caponanta, or sweet and sour aubergines, is probably one of the better known dishes here in not so sunny climes, and one that is fairly easy to replicate, all the ingredients being easy to find in English shops. The one ingredient that will slightly differ is the type of aubergines we have available in the supermarkets. The Sicilians usually use the rounded ‘Tunisian’ aubergines which are thought to be sweeter than the dark purple oval variety we are accustomed to seeing. I am sure they are available in more specialist shops but for the purposes here the oval ones will be fine. They are what I used for this recipe and they worked well, but if you are able to find the Tunisian variety do use them for that added nuance of authenticity. 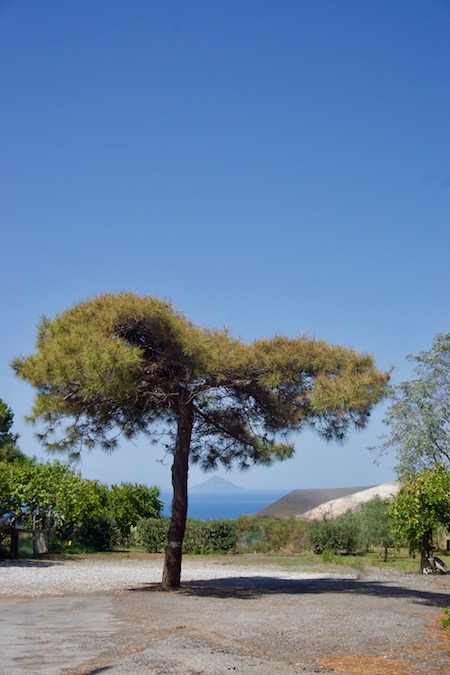 As capers are such an important part of Sicilian cooking, you see the long hanging branches of caper bushes growing everywhere at the sides of the roads, I brought rather a lot, salted and unsalted, back with me to use at home. Their saltiness, like olives and anchovies, is a flavour I adore and use a lot in my cooking. Maybe that’s why I find this dish a little addictive, having made it three times already this week. The quantities here make just enough for three, maybe four, but I would suggest that if, like me, you really like it, make double and store it in the fridge.  Some say it tastes better after a few days of keeping when the flavours have developed but mine has not even been allowed to get to the ‘cold’ stage, always being eaten before it gets anywhere near the fridge. 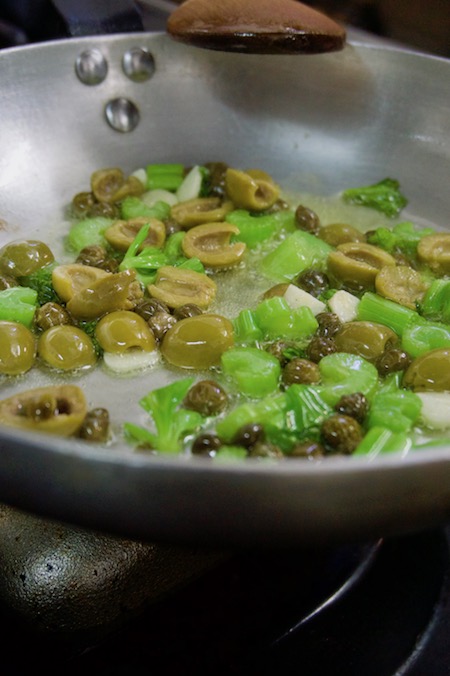 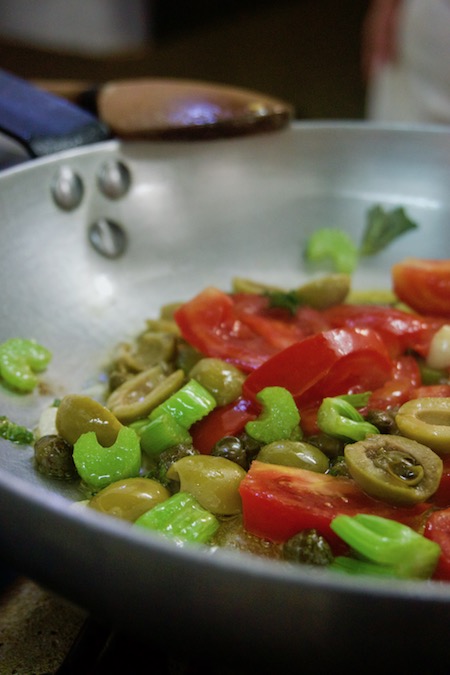 I had the priviledge of watching this caponata being cooked in a restaurant kitchen on the sleepy volcanic island of Vulcano, one the of the Aeolian Islands just off the coast of Sicily.

The large family run restaurant sits on its own in the countryside with a beautiful view across the turquoise sea, twinkling in the heat from the still hot September sun. 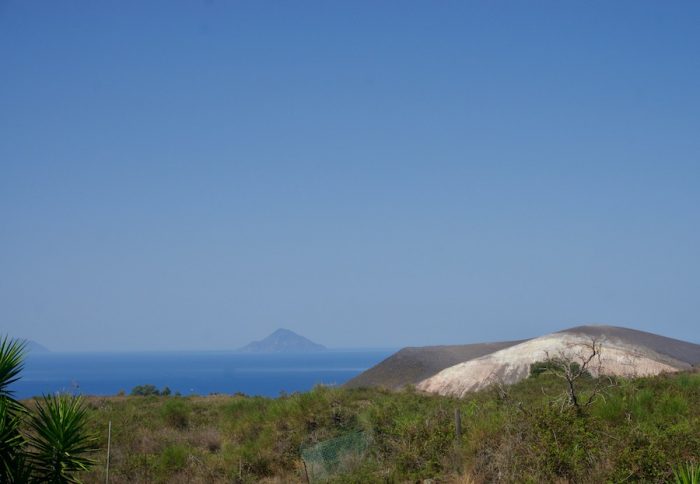 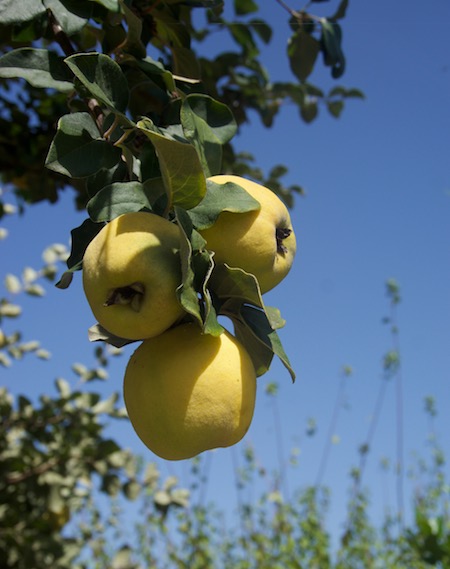 Santina, who runs the restaurant with her daughter, Nancy, began her food career many years ago when as a young woman she started cooking chickens on a basic spit down at the local port. Many years later and now in a modern restaurant kitchen with the convenience of gas and electric, she still has an infectious enthusiasm for her cooking and the unpretentious vegetarian antipasto dishes she demonstrated with Nancy showcased the fresh and vibrant produce of the region, cooked in the simplest way. 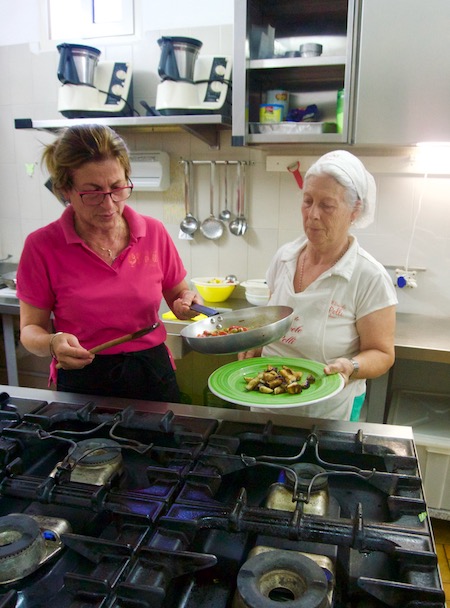 The three basic antipasto dishes they cooked were all a delight – caponata, perperonata and an unfussy but luscious dish of sweet and sour courgettes, fried quickly with mint and onion then finished with basil. Having eyes much larger than my belly I ate far too much of all three and hardly had room for the next course which was the most tender and succulent stuffed squid and perfect involtini, made with delicate, transparent slices of the freshest swordfish. 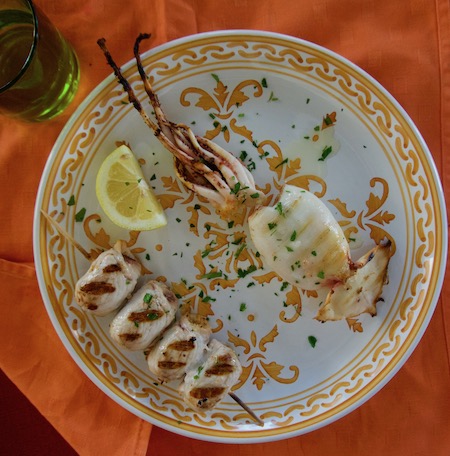 The taste bud tingling agrodolce flavour in all of Santina’s antipasto was made by using vinegar, the ‘agro’, and sugar, the ‘dolce’. For the caponata I made at home I used a good quality balsamic vinegar although the Sicilians aren’t fussy about which vinegar they use so you can substitute it for a white wine vinegar.

Caponata is a dish made all over Sicily and the Aeolian Islands and probably has many versions, with recipes handed down from generation to generation, all with individual tweaks and twists added along the way. The version made here is unusual in that it contains no onion and instead of adding a tomato sauce, just fresh tomatoes are used which I think makes the dish much lighter and cleaner tasting. Santina cooks the aubergines in a separate pan to the other ingredients, which she calls the ‘condiment’, then plates the aubergines before spooning the condiment on top. Without written instructions, I’ve tried to follow her recipe as best as I can and hopefully the photos that I took from her kitchen will give you extra guidance.

Although all meals we ate during the week long tour were accompanied by red and white (and sometimes rosé) wine, with this lunch I plumped for the white Grillo Cavallo Delle Fate from Tasca d’Almerita which paired with the squid perfectly with its Mediterranean floral and tropical fruit notes. Laura from Aeolian Adventures has extensive knowledge of wine from the region and was always on hand to offer advice and suggestions and to order appropriately for us if we required pointing in the right direction.

View from Vulcano when hiking up to see the crater

Admittedly I’m rather a hopeless lunchtime drinker as usually just once glass, even when partaken with a substantial meal, sends me into a warm, cozy stupor, leaving me fit for nothing except maybe a lay on the sofa for forty winks. However, I got rather used to and enjoyed all the wine tasting we did during the week. I must say was was very impressed with the quality of both the reds and whites  and since I’ve been back I have been on the look-out for Sicilian wines in my local supermarkets. I have found a small selection in Marks and Spencer, Morrisons, Aldi and Waitrose so they are about but you do have to look quite hard to find them. Watch out for Grillo and the rich, plummy Nero D’Avola, the most well known of the Sicilian reds. If you are an online shopper, there seems to be a larger choice and obviously if you have a good wine merchant near you they should be able to advise you on what to try.

I appreciate that with wine prices getting steadily higher, no one wants to fork out a tenner plus on a bottle of unfamiliar wine that might end up being poured in the stew, so it is quite difficult to break away from the same old familiar grapes we know and love. But do keep an eye out for a Sicilian label next time you are buying a bottle, you might be pleasantly surprised. 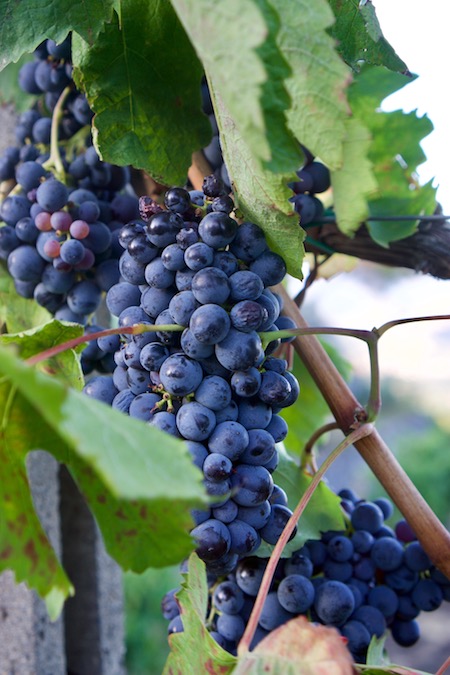 Another dish we had demonstrated for us while we were on Vulcano was one of my favourites, although it would be incredibly hard to pinpoint a singular dish from the vast array of food we ate over the course of the week.  An Aeolian speciality of rabbit in sweet and sour was cooked by Rosi at another run family restaurant up in the hills. In this dish the rabbit was finished at the end with sugar and vino cotta, a  syrupy liquid made by cooking the left over grape must. It takes about two days to reduce the must to this consistency but wow is it worth it! It not only lends an unusual very distinctive flavour, it also gives the food a seductive dark glossy glaze. This is another product that most will have to buy online unless you are lucky enough to live near an Italian deli or suchlike. 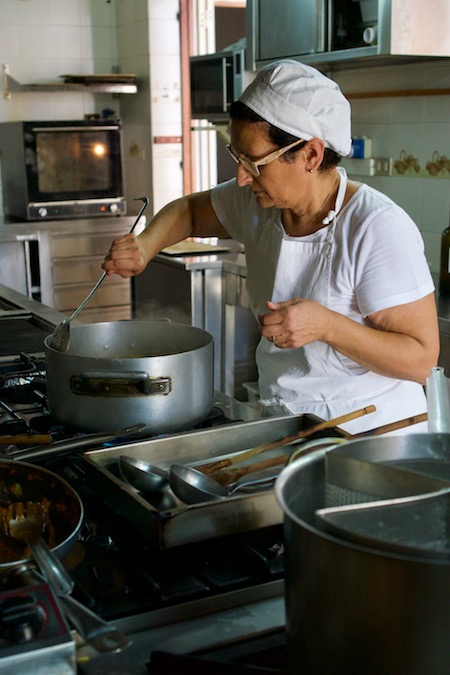 Rosi taught us how to make maccheroni, using old umbrella spokes to roll the tube shaped pasta. Being a group of seven notice pasta makers, our resulting pasta, pooled at the end onto one large floured tray, was probably not the most consistently sized ever to be served in Rosi’s restaurant. However, whatever it was lacking in visual appeal was certainly made up by the taste of the pasta sauce. Pasta con le sarde, pasta with sardines, is considered to be Sicily’s national dish and for good reason. A mouthwatering combination of sardines, wild fennel, pine nuts, saffron, raisins and white wine, this fantastically fishy pasta sauce was the brainchild of quick thinking Arab chefs back in 827.  After their invading Saracen army arrived in Sicily, apparently they had a reccy around Mazara port and came up with the ingredients for this dish to feed the hungry troops.  Lucky troops! 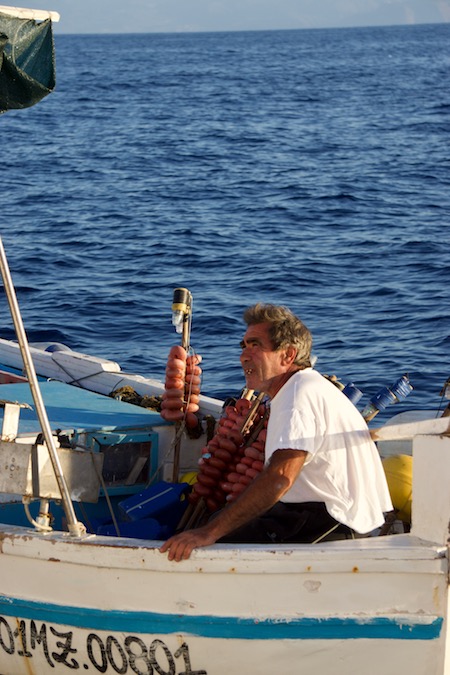 Following Rosi’s  instructions, translated by Laura from Aeolian Adventures who speaks perfect Italian, we made veal involtini, skewered rolls of thinly sliced rose veal, stuffed with breadcrumbs flavoured with pecorino, parsley and oregano, a widely used herb. Panelle, little fried fritters made with chickpea flour, the tastiest stuffed aubergines, lemon tarts, in the lightest, shortest lemon pastry shells and watermelon gelo, all of which we ate under the shade of a canopy in the garden at a leisurely pace, unhurried and blissfully happy.

It was such a pleasure to visit these two unassuming and modest restaurants doing a very important job on Vulcano in preserving the local traditions of regional, rustic fare. We were treated to the most wonderful meals, some cooked by our own fair hands and some cooked for us by these local women (and men) who welcomed us into their working kitchens with open hearts and shared their valuable knowledge freely and always with a smile. Thank you. I hope I’ve returned a better cook. 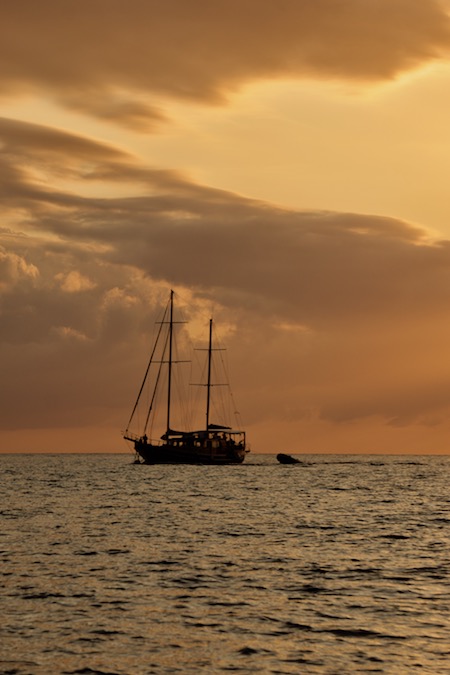 My very special thanks to Laura at Aeolian Adventures who made this trip possible and for organising everything so beautifully. There is is link to her website in the post.

Disclaimer: This trip was sponsored by Aeolian Adventures who paid for the flights and all other expenses. However, comments and opinions in this blog post are solely my own, I received no financial reward for writing this or any future blog posts.