You are here: Home / Uncategorized / MY AEOLIAN ADVENTURE 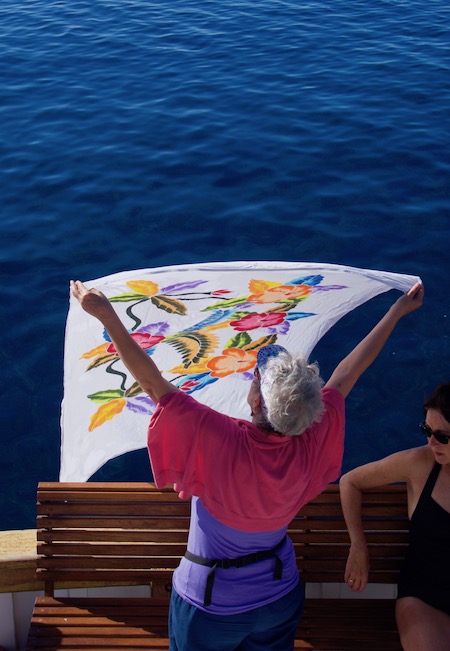 If you are one of my lovely Instagram followers you will know that I have just returned from the most magical of trips to Sicily and the Aeolian Islands. The exclusive food and wine tour was organised by the ever effervescent Laura of Aeolian Adventures . Her company specialises in tailor made gastronomic holidays around this most fascinating and captivating group of islands, seemingly strewn nonchalantly in the sea just off the toe of Italy’s boot. 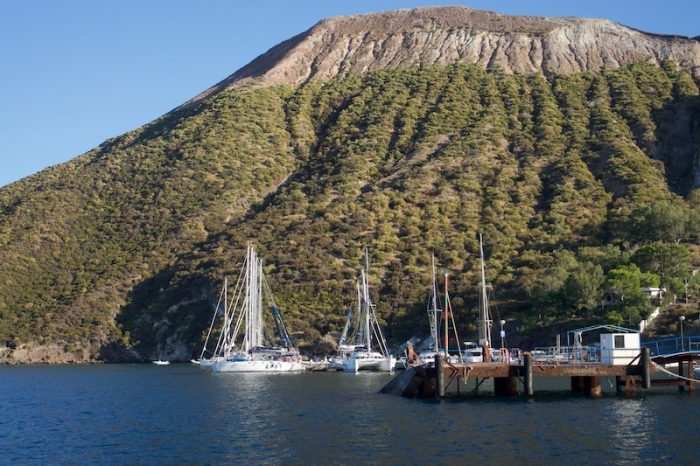 Of course there is nothing nonchalant about the siting of these seven inhabited islands and several small islets, sitting north-east off Sicily, the more established holiday destination of the region. Surrounded by the shimmering crystal clear waters of the Tyrrhenian Sea, these UNESCO protected islands represent a volcanic arc, resulting from a complex converging of tectonic plates some million years ago, a mere smidgeon in time in our planet’s geological history.

Out of the two active volcanoes, Vulcano and Stromboli, the latter is probably the better known, being one of the most active and visited volcanoes in the world today. It is the most recognisable of the islands too, a perfect text book picture of a volcano, rising out of the sea like a giant barnacle. 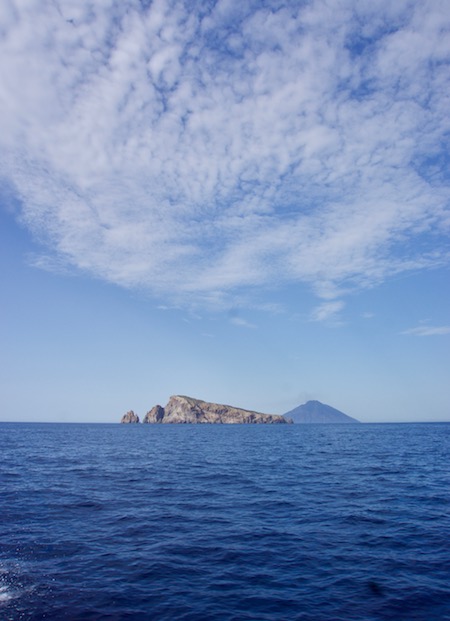 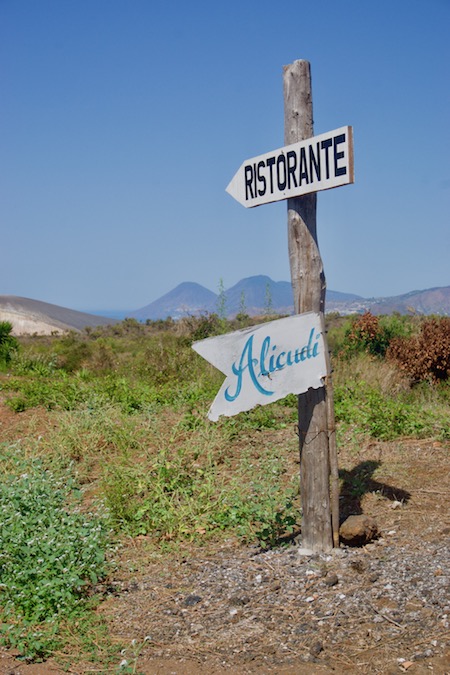 I did find myself pondering whether I could live a happy and care-free life in a little white house on the slopes of an active volcano, but decided this particular thrill probably isn’t for me, what with my occasional bouts of high anxiety. However, there is something highly seductive and exciting about the prospect of living in such a potent environment. A combination of feisty Italian temperaments, the heat and being in a constant state of heightened awareness certainly puts a frisson in the air. This is the island where passion erupted for Roberto Rossellini and Ingrid Bergman who shook Hollywood in 1950 with their extra-martial affair whilst making the film Stromboli. The red house where they stayed, being no hotels on the island back in the 50’s, sits on the edge of a winding road, a little way down from the distinctive yellow church, Chiesa di San Vincenzo, both of which are tourist attractions for visiting holiday makers. 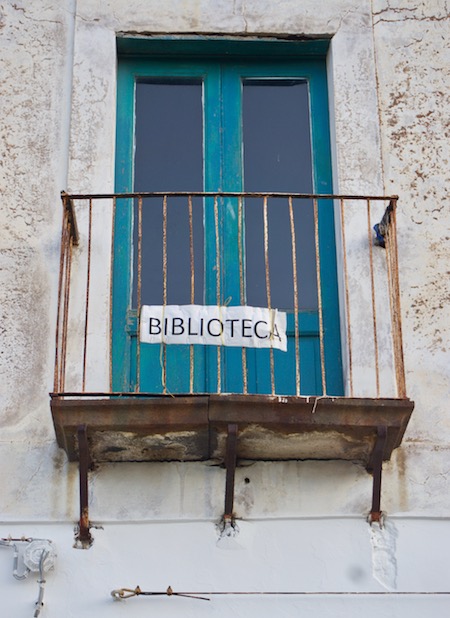 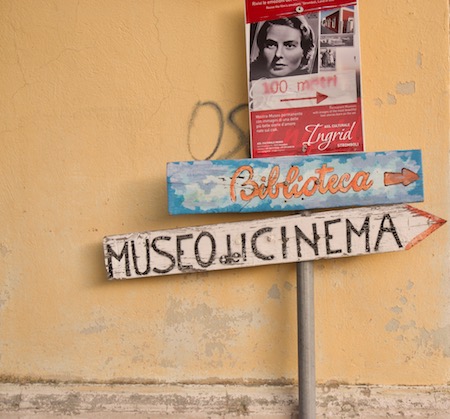 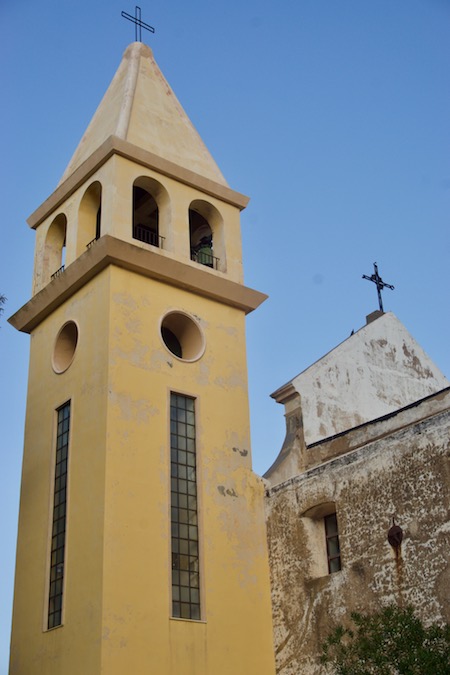 Due to having to return to our boat for dinner, our time on Stromboli was limited. Quick thinking Laura (a trait we all came to admire and be thankful for over the week) hired three little taxi carts to quickly whizz us round the extremely narrow streets, lined by whitewashed walls with vibrantly coloured gates placed intermittently in small archways. Three small unassuming doors with the names ‘Tito’ ‘Rosa’ and ‘Dali’ would have been passed by unnoticed, until Laura pointed out they were the entrance to the villa owned by the flamboyant Italian designers Dolce and Gabbana. Our friendly taxi driver was eager to inform us the seats we were perching on had been graced with the bottoms of Madonna and Naomi Campbell, no doubt guests of the island’s most celebrated inhabitants. 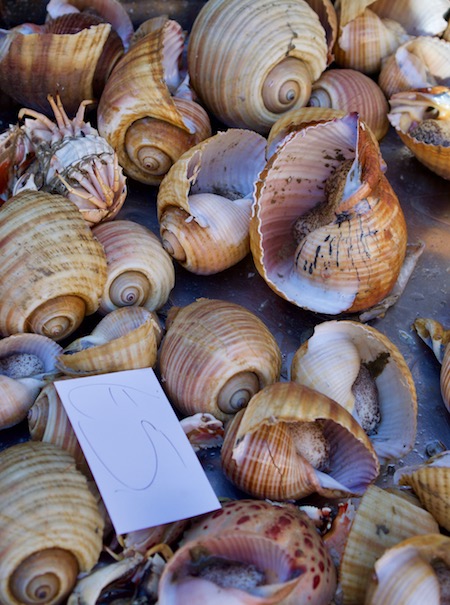 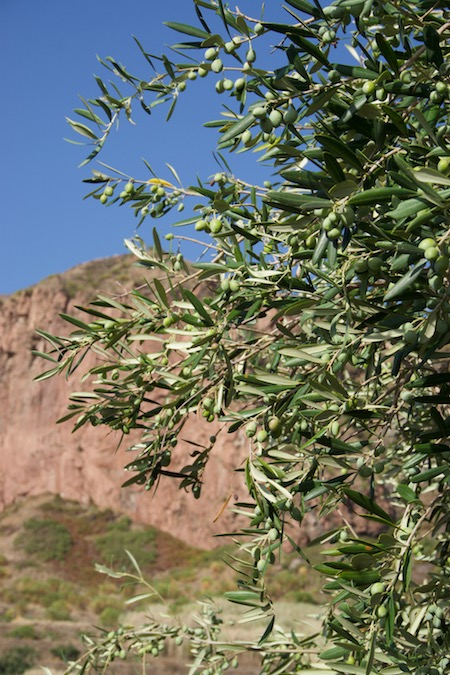 Capitano Felice, a bearded, jovial bear of a man, was cooking us dinner on our last evening and whilst he prepared the pasta he guided his beautiful motorboat Miriana, which had been our private charter for the afternoon, around to the sea below the imposing lava blackened slopes of the Sciara del Fuoco. He dropped anchor at the best vantage point for us to watch Stromboli spew its fiery lava bombs into the air later on in the evening. 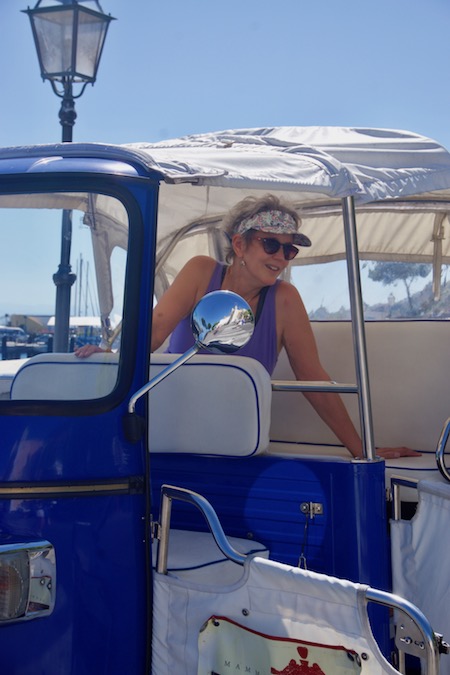 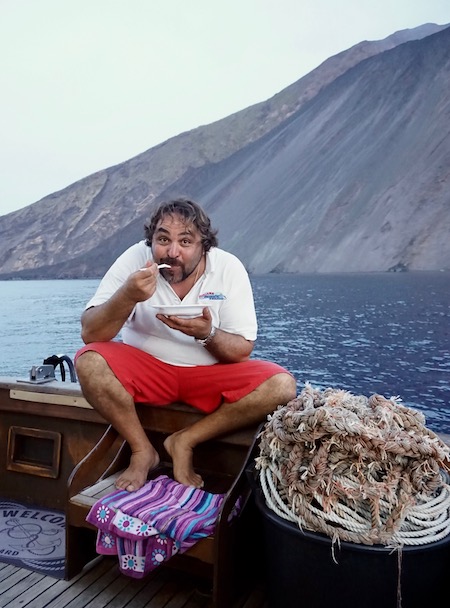 As the sun set and the vast sky turned a deep midnight blue sprinkled liberally with with bright stars, we sat around the dining table while the jolly Capitano served his magnificent pasta dish containing all the mouthwatering Aeolian flavours we had grown to appreciate more and more over the week. The sweetest, reddest tomatoes, creamy aubergines, salty capers and the freshest swordfish. He then surprised us with some very moreish fig pastries and a bottle of his homemade mandarin grappa. My kind of man was Capitano Felice! As we chatted and savoured the last of the chilled Grillo, every now and then aware of the gentle motion of the boat, there was no time or need to contemplate any end of holiday blues. 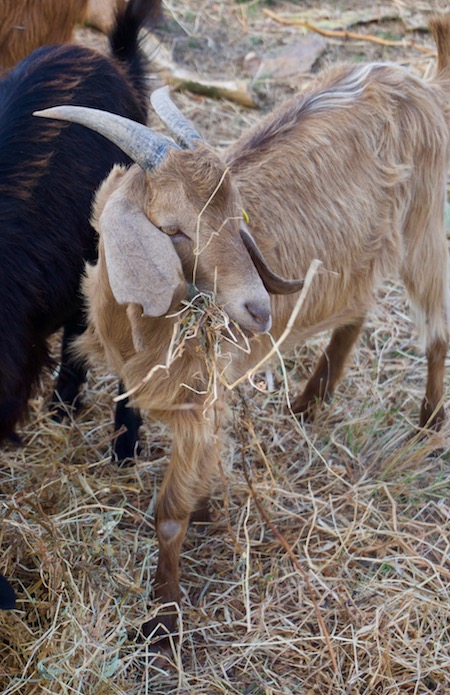 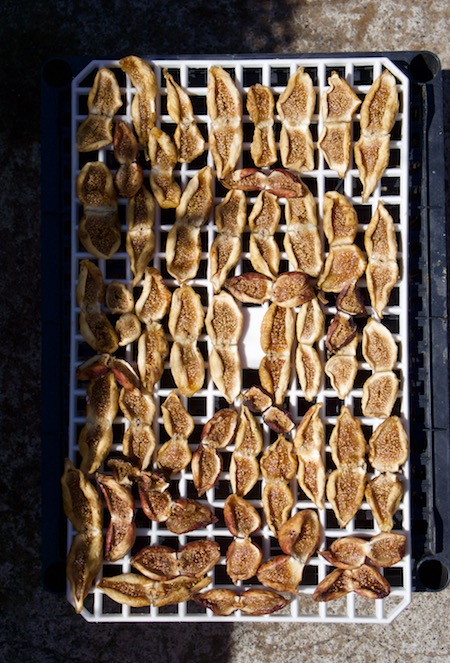 Our very last day had been a truly wonderful and memorable one. It had started in the morning with a trip to a goat’s cheese farm then on to a family run restaurant on Vulcano for a cooking demonstration and lunch with Nancy and her mother Santina. Replete with copious amounts of Aeolian deliciousness, including the best caponata I had ever tasted, we were then collected by the delightful Santi, our smiling taxi driver who was always at hand to take us wherever on Vulcano Laura wished. This time it was back down to the port where Capitano Felice and our transport for the rest of the day awaited. 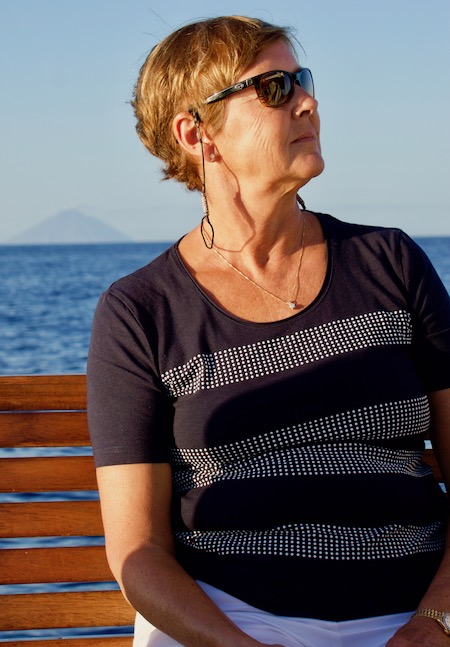 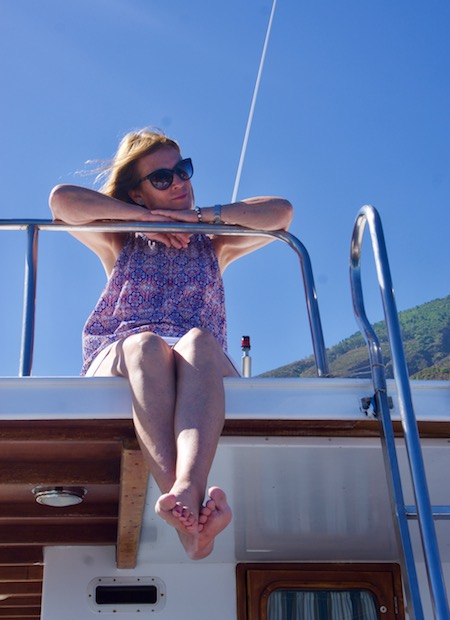 The afternoon swimming off the boat in the clean, refreshing azure waters, the trip to Stromboli and the generous gift of Aeolian food from Capitano Felice would have been enough to end the day on a high, but to witness Stromboli erupt was a fitting and awe-inspiring end to what I thought was a pretty unsurpassable week.

My precious seven days on Sicily and the Aeolian Islands were shared with Laura from Aeolian Adventures, who organised everything in her indomitable but charming way, and six other inspiring, funny and warm spirited ladies. Jane from California, Polly from Baltimore, Julia from Barbados, Beth, Carole and Elspeth from England, gelled together seamlessly into one convivial group, united by a universal love of good food and wine. They were the most joyous of company for an unforgettable week of cooking, eating and drinking as well as seeing the sights of this beautiful and beguiling part of the world. 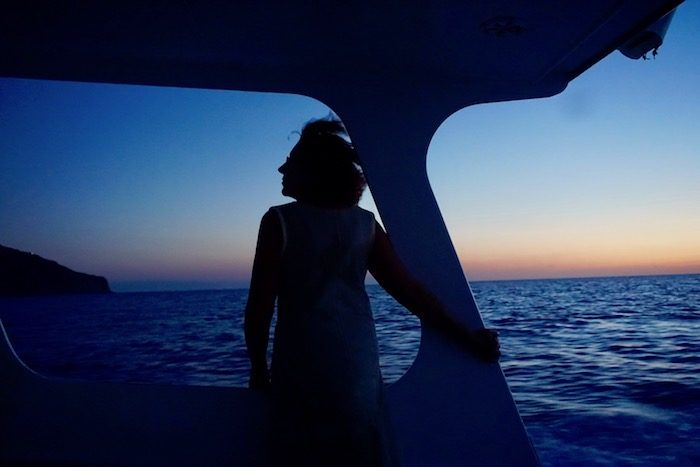 We discovered so much about the area thanks to Laura’s most extensive knowledge of the region, herself having family on Sicily and fond memories of cooking with her Nonna when she was younger.  She has a sincere and friendly connection with the locals and as I have extremely limited Italian (take that as more or less non-existent), it was a huge bonus to be with someone who could translate and ask questions if the need arose, which in my case was quite often. 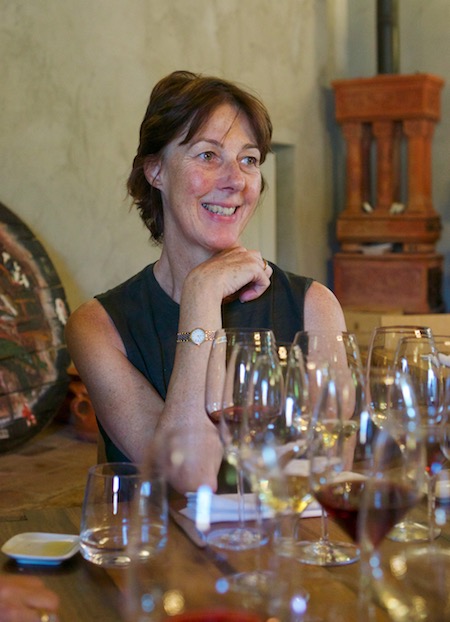 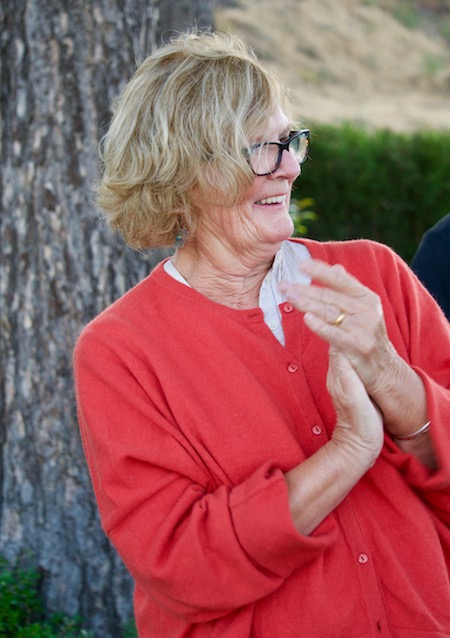 This was meant to be a short post just to let you know I was back, but the week’s itinerary was filled with so much fun it is very hard to stop typing. We visited vineyards and talked to the passionate winemakers. We delighted in making and eating our own delicious cannoli including ‘scorze’ the crispy, speckled tubes that hold the sweetened and chocolate flecked freshest ricotta cheese. 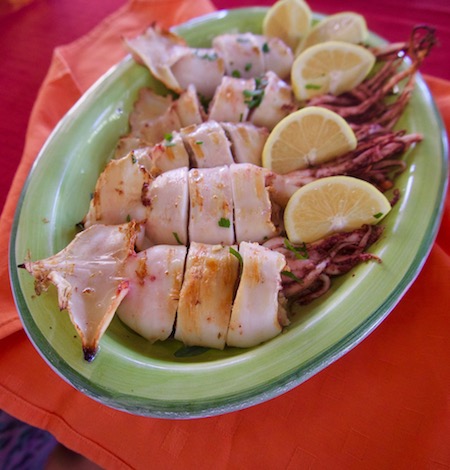 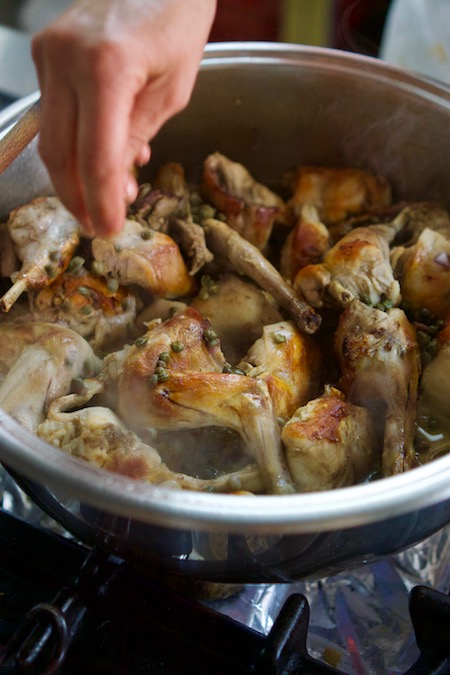 We made different types of pasta, arancini, stuffed aubergines, lemon tarts, biancomangiare and stuffed swordfish balls. We met and cooked with the most welcoming and accommodating of chefs who shared with us the pleasures of stuffed squid, rabbit in sweet and sour sauce, peperonata and other wonderful antipasto dishes. The list goes on. We ate heartily and drank the most exquisite wines, both red and white, and not forgetting the dessert wines Passito and the strictly regulated Malvasia delle Lipari. 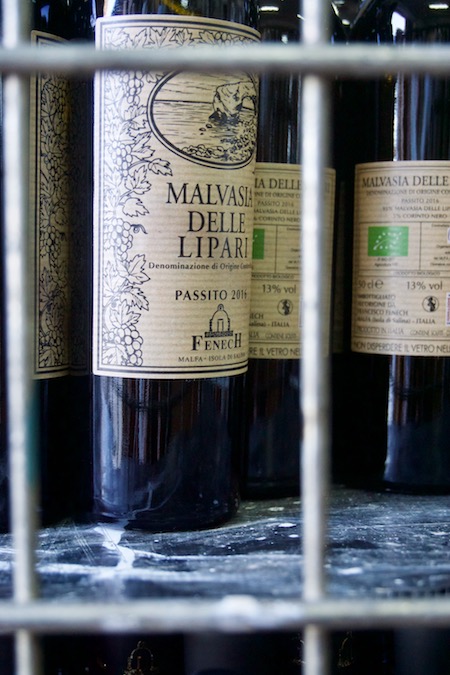 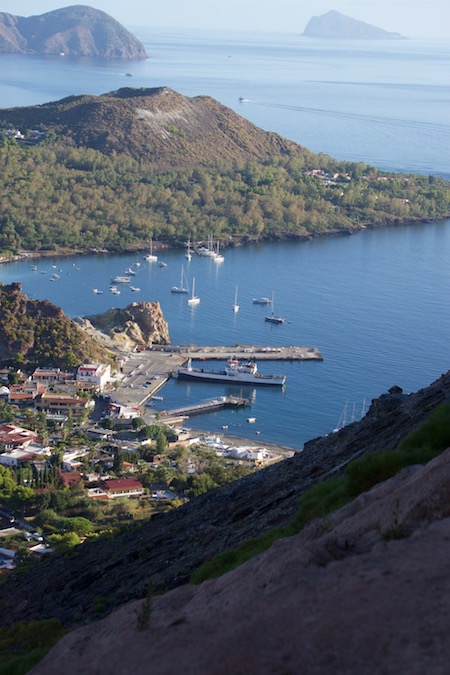 I have started my journey with you back to front, as these are details from my last day. There is so much more to write about including a night time squid fishing expedition, an early morning hike up Vulcano, the many wonderful characters we had the honour of meeting during our stay and of course all the food that we were blessed with on our plates.

I must stop now as my week’s worth of washing isn’t going to jump into the washing machine of its own accord. I shall be back shortly with more tales, in the meantime I leave you with some photographs of our very special Aeolian Adventure.

My very special thanks to Laura at Aeolian Adventures who made this trip possible and for organising everything so beautifully. There is is link to her website in the post.

Disclaimer: This trip was sponsored by Aeolian Adventures who paid for the flights and all other expenses. However, comments and opinions in this blog post are solely my own, I received no financial reward for writing this or any future blog posts.