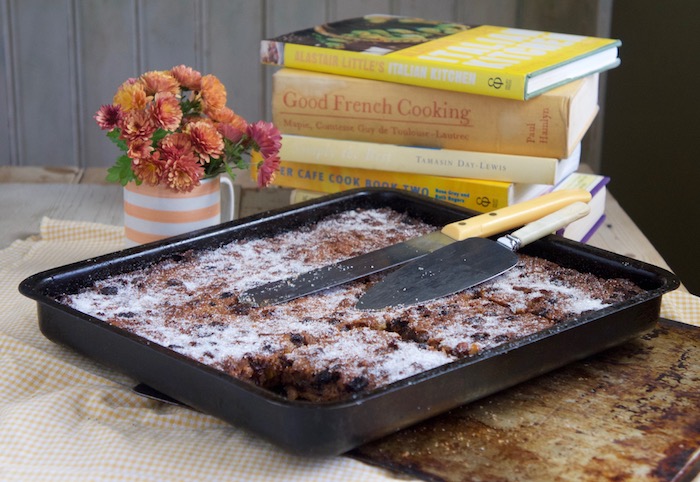 It’s me. Back again. After a rather turbulent year, hopefully this time I’m here to stay and I must say it is nice to be sitting here tapping away at the keyboard again. I must admit at one point I didn’t think I would be returning to social media in any way, shape or form. So much so that I made a few trips to the charity shops to unload boxes of props and bits of kitchenalia that I had collected over the years that were beginning to clutter up my kitchen to the point of bursting.

My favourite room in the house, certainly the one I spend most time in, has now returned to some sort of normality. Tidy cupboards with neat rows of dishes that can be easily extracted without risk of the whole lot crashing out onto the floor and no baskets and crates hiding under the table and behind doors, overflowing with old table cloths and odd napkins. However, I am already starting to regret my mammoth spring clean as nothing is in the ‘right’ place, my favourite teapot has mysteriously disappeared into the ether and I seem to be short of everything from baking dishes to milk jugs.

Even though I do feel some pang of remorse at undertaking what was rather a severe decluttering hatchet job, I have decided not to harp on about lost causes and to start afresh (although I am really missing my mismatched blue plates and that little square of red gingham!). For many years I have had a love of rummaging around boot sales and second hand shops and am looking forward to replenishing those now empty baskets and crates with more stuff someone else has decided they do not want to keep anymore. 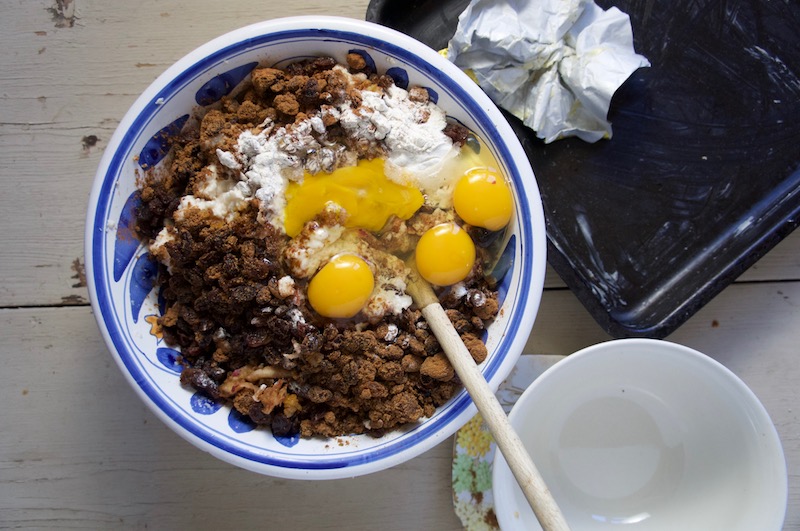 After thinking long and hard about what recipe to include in my first post after such a long break, I decided it would be a good idea to go back to basics and remember why I started the blog in the first place.

The Eating Tree started as a homage to my mother and all those wonderful home cooks that handed down their talents and recipes to future generations. My mum, who is still alive but sadly has been living with vascular dementia for around 14 years now, cooked for us as a family every day of the week. Meals were always cooked from fresh, dinner was always served with pudding, eating out was a rarity, save for special occasions.

My mum did make use of cook books and magazines to expand her recipe range, bearing in mind she grew up in a generation when olive oil was purchased at the chemist and garlic was something only foreign people ate. Looking back, we probably ate quite adventurously for a family in the 1960’s and 70’s, I can remember quite vividly my mum making things like frivolous raspberry charlottes, baked cheesecakes and a whole host of luxurious gateaus. Chicken ballentine was a buffet party favourite, something that most cooks now would find a faff, and I never  got round to making homemade chicken kievs like her.

In between the newly discovered flavours and exciting dishes from far off lands, her daily staples were dishes she didn’t have to use a recipe book for, recipes passed down from her own mother which were never written down in any book.  Traditional English fayre like hearty stews (always with suet dumplings), pies with the most divine pastry, old fashioned Eccles cakes and the daddy of the them all, my mum’s bread pudding. 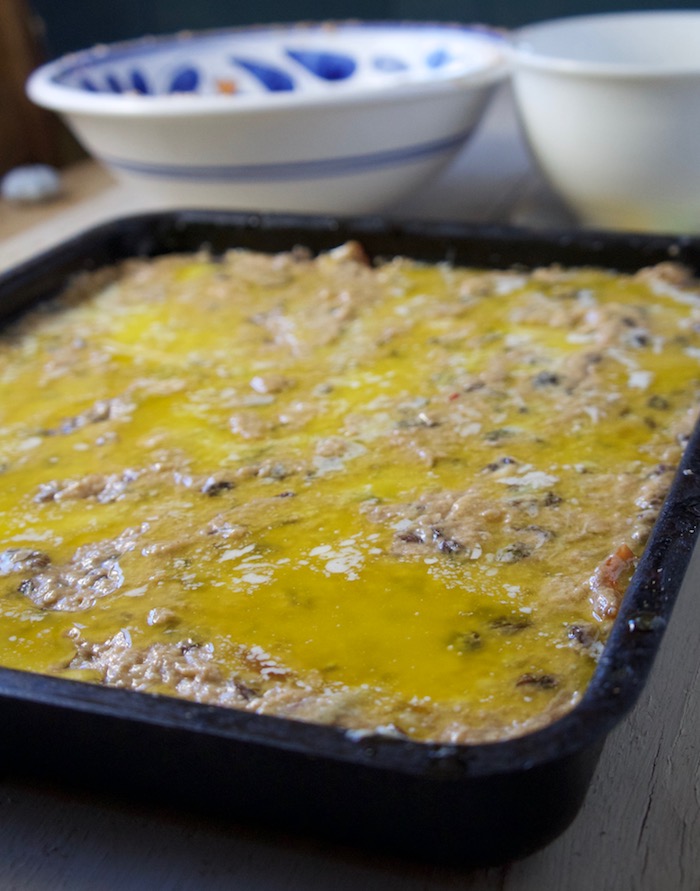 A tin of bread pudding, not bread and butter pudding which is another old favourite but is something else altogether (recipe here), was nearly always to be found in my mother’s oven. Eaten fresh with custard, what was left in the huge pan was kept in the oven and the next day she used to warm it up. I remember my dad used to eat great slabs of it, preferably the corner bits which were extra crispy.

When I first started my cake stall at Wyken Hall (I no longer sell cakes just in case you were wondering) I thought bread pudding would be a great thing to sell in the colder months but my mum had by that time lost any memory of cooking so I started trawling cook books and online to find a recipe. Nothing was as good as hers and the stuff sold in most bakeries, insipid looking chunks of flabby bread with fruit you would need a microscope to find, just didn’t cut the mustard.

So, from this I started my quest and I spent many, many months trying to replicate the bread pudding of my childhood. I finally settled on this recipe which I am extremely happy with and is near as damn it like my mums. All I can say is it used to sell really well. Some customers would buy a few squares to freeze (something I have never tried although apparently it freezes well). One thing I did notice was, it definitely sold more to the males. Many men who used to buy it would comment  ‘Ooh I haven’t seen that for years’ and women brought it predominantly for the men in their lives. Perhaps it’s a nostalgia thing, I don’t know and I wonder whether anyone under the age of 30 even knows what it is. I do know my 11 year old son woofs it up so hopefully he will pass the recipe on to his family when he is older to keep the flag flying for this fabulous old fashioned pudding. 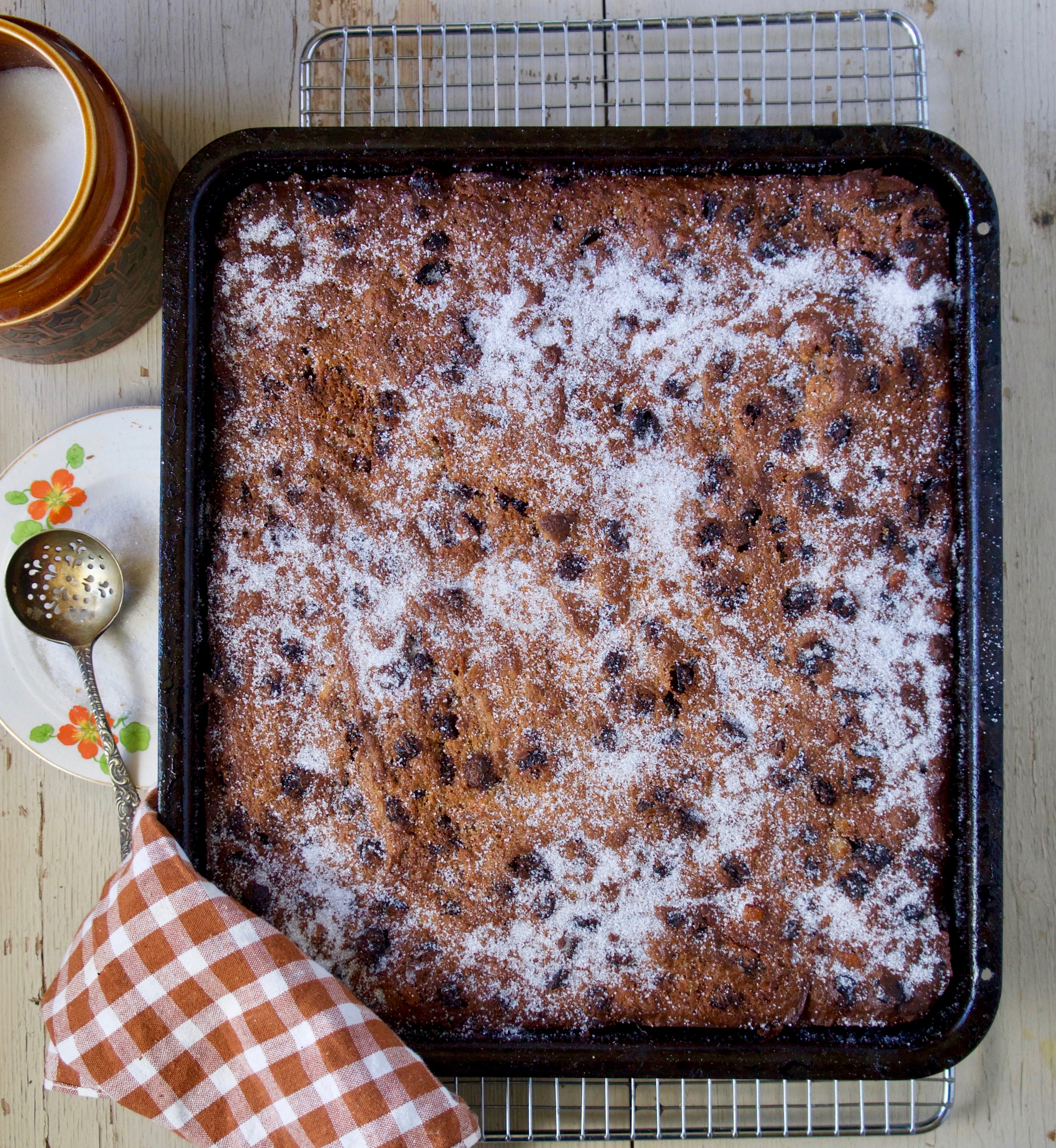 Bread Pudding was probably originally made by frugal cooks to use up left over bread but I never have enough homemade bread leftover to use so for this, so for my sins I buy the cheap cut loaves from the supermarket. I take it out of the packet and leave to go stale before using. Any bread will suffice I imagine, although do remove the crusts otherwise you tend to get hard bits of bread in the pudding.

The recipe below does make a huge pan, if you are not so piggy as us feel free to halve it.