You are here: Home / Baking / PANETTONE BREAD AND BUTTER PUDDING 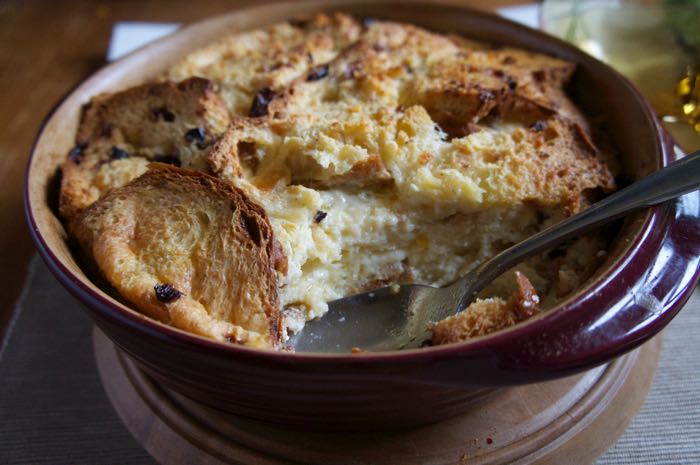 I seem to have two obsessions at the moment (well probably a lot more than two but these are the two that I am aware of). One is the orange, which I seem to be using in everything I am cooking at the moment. Nothing wrong the with the beautiful orange citrus fruit, packed with Vitamin C, healthy and generally a good egg. The other one is bit on the wrong side of the tracks as far as the food police are concerned but I just can’t help myself. I have rediscovered the heady pleasures of Clotted Cream and it has drawn me into its creamy, dark, delicious world of calorific sin. 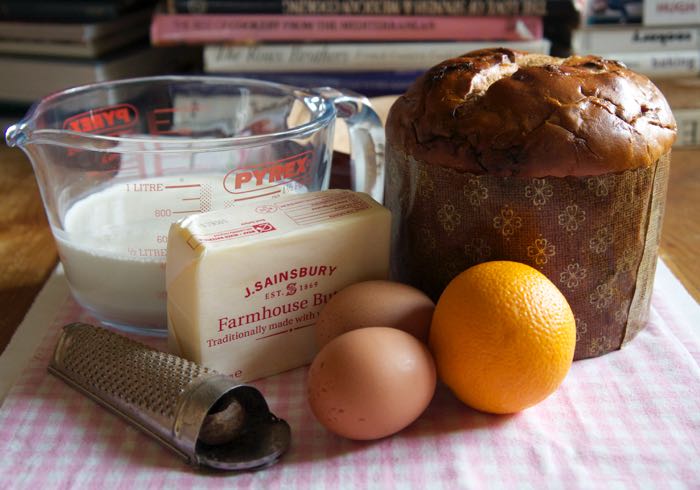 It all started a couple of months ago when I was having a conversation with my cousin Tim, who remarked, somewhat wistfully, that the happiest days of his childhood were the ones spent with his cousins, myself included, on our family holidays in Devon. For quite a few years when we were young our holidays were spent together on a working farm, run by a lady I shall call Mrs Durrant. I say this because Tim insisted her name wasn’t Mrs Durrant at all, but that’s what I’ve been calling her for forty years and so she will always remain in my memory as Mrs Durrant. Kind, portly, apron-clad Mrs Durrant and her much thinner husband who we rarely saw as he was always working, lived on the farm with their tall, lanky son who we very unkindly nicknamed Lurch due to his remarkable likeness to the Addams family character. And I mustn’t forget their one eyed Jack Russell terrier, Patch, who had a penchant for ankles, especially the postman’s who used to arrive on the farm on his push bike and scooter off as quickly as possible down the bumpy farm track much to our amusement, chased by a little white yapping dog. 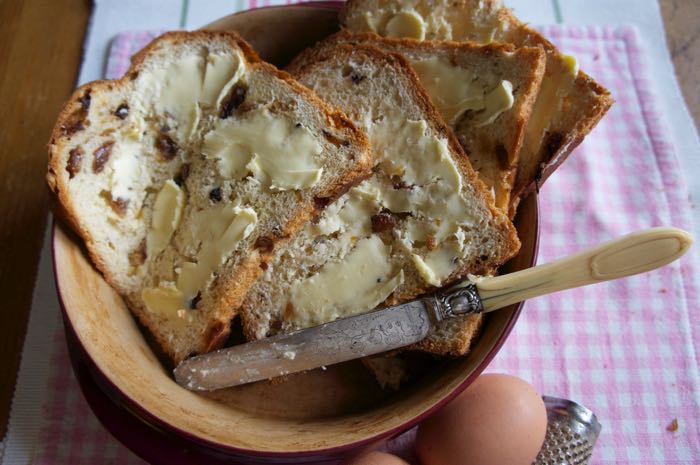 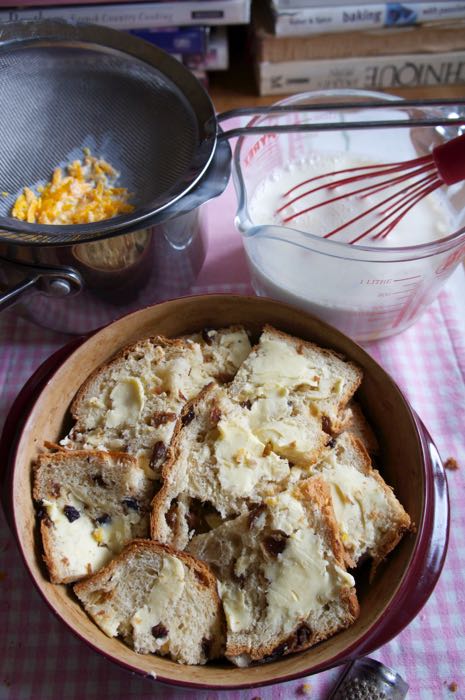 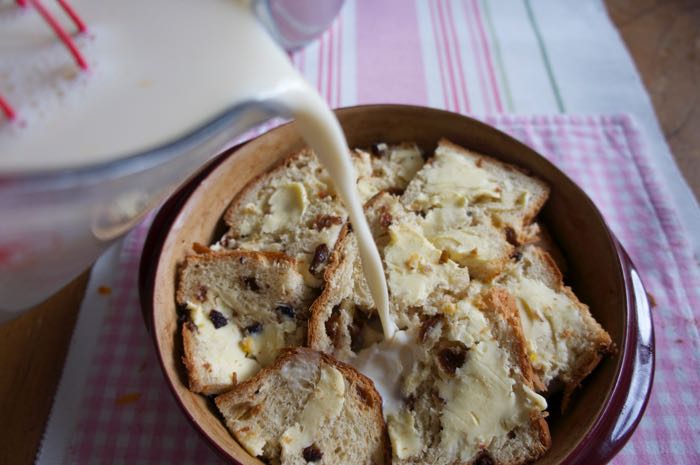 Theirs was a traditional working farm, stocked with every farm animal Old MacDonald would have had, the like of which is now probably a thing of the past. Being pre health and safety days, we children were allowed to wander off as we pleased. My father tells me I had a preoccupation with the ducks and if we had duck for tea I wouldn’t eat it until I had rushed outside to do a headcount. These were truly halcyon days of a childhood without cares. Days spent on the beach from early in the morning when we used to arrive to claim our favourite spot in the shelter of some rocks. The adults walked like pack horses across the sand dunes from the car park carrying an assortment of sun chairs, lilos, games, huge water containers and numerous bags and cool boxes full of food to keep us satisfied for the day. 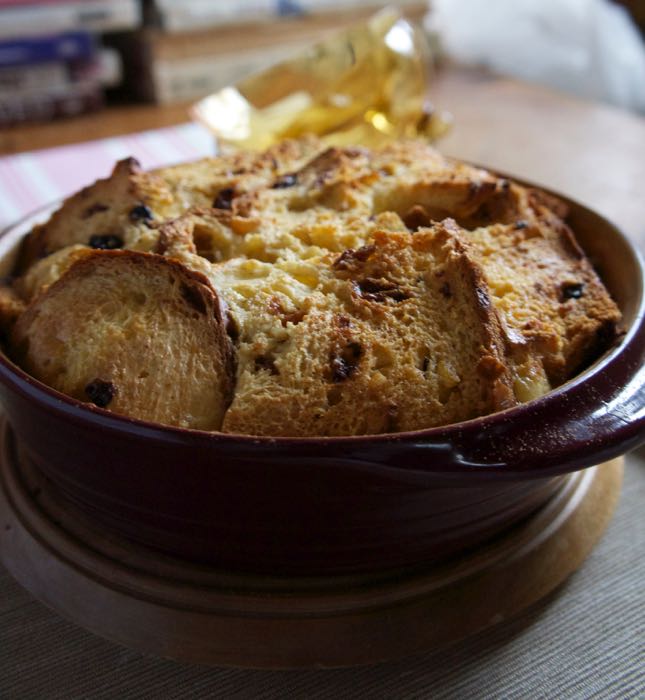 After a day spent swimming and surfing, playing bat and ball, making gigantic sandcastles and new friends, we put back all the crabs and guppies we had collected from the many and abundant rock pools, then we went home sun kissed, salty, full of sand and extremely happy.

Sitting in the hot and sticky car on the way back to the farmhouse we always played at guessing what we were going to have for our evening meal. The wonderful aromas from the kitchen wafted up the stairs as we were getting bathed and changed in the rooms above. The rosy pink children would share the same bath water and we all rushed to get in first as the last one would have to sit in a thick layer of sand at the bottom of the metal bath. 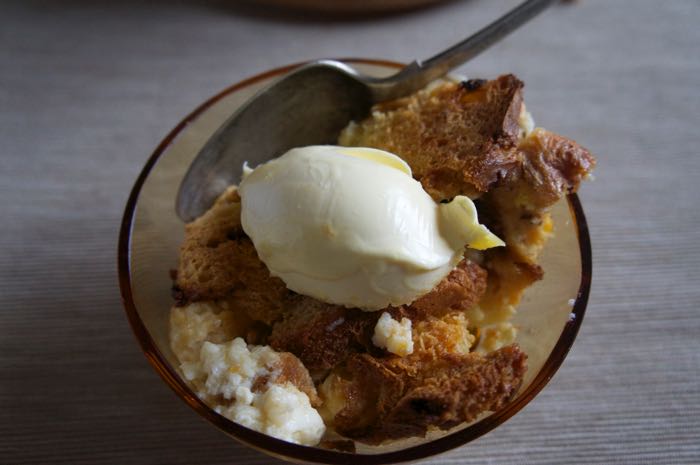 Mrs Durrant was the real deal when it came to farmhouse cooking. Even in the warmth of balmy summer evenings she would serve a roast lamb or a roast beef dinner. On some nights we would be presented with a huge home cooked ham accompanied by simple salads and fresh vegetables from the vegetable garden. Her huge chicken pies would fill us up until we were fit to burst but we always, always had room for pudding. Whatever dessert was, be it a ruby red summer pudding crammed with fresh fruit from the garden or an apple pie big enough to feed an army, everything was accompanied by a vast bowl of clotted cream. And I mean vast. I assume now that she must have made it herself on the farm as it would have cost an arm and a leg to provide that amount every day. 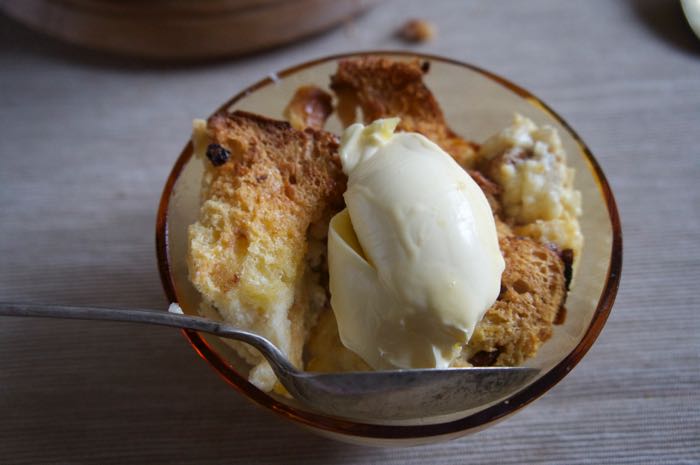 As an adult I have only had clotted cream on the odd occasion when I have had a cream tea in a tea shop somewhere and of course at The Ritz where they wouldn’t serve a cream tea with anything but the real McCoy. If I cook scones at home double cream whipped with a tiny bit of sugar usually does the job, until about three weeks ago that is when my husband cooked scones and bought in with him a carton of Cornish Clotted Cream and since then I have been hooked. It actually tastes like cream as I remember it, rich, sweet, with that dark grainy crust on top. At the moment I am finding myself in dire need of the old fashioned traditional comfort foods and I can’t think of a more comforting dessert than bread and butter pudding. One of my father’s favourites and really cheap to make out of bread a few days old, my mother used to cook this regularly along with bread pudding which is an entirely different kettle of fish and deserves a post of its own.

This particularly moreish bread and butter pudding was made using a fruited panettone that surprisingly no one at home had eaten, probably because it had been sitting unseen in the bread bin. I went the whole hog and made a custard using single cream and, having my other obsession to satisfy, I grated the rind of a orange into the warming milk and strained this into the egg mixture. Not quite an Osborne Pudding as I didn’t use marmalade, but the resulting custard did have a very subtle, delicate orange flavour. The whole thing, soft luscious custard base, crispy light top and topped with clotted cream was a confection so wonderful I can’t actually put it in words. Just ‘mmmmm’. That’s all I could think of as I ate it. Although my waistline might have something to say. 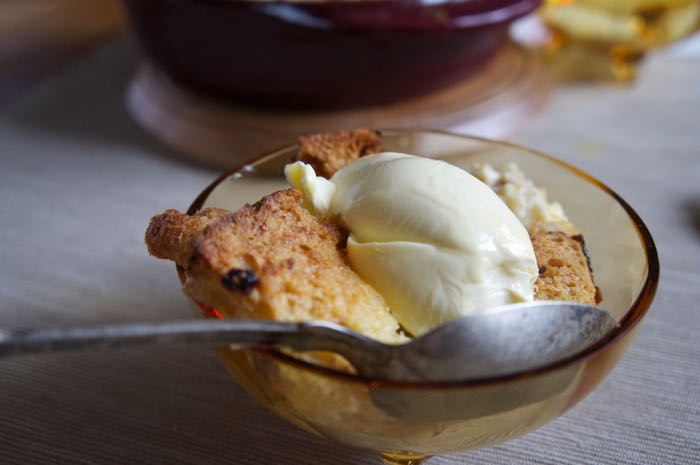 Print
BREAD and BUTTER PUDDING
Author: Lindsey Dickson
Recipe type: Dessert
Prep time:  15 mins
Cook time:  40 mins
Total time:  55 mins
Serves: 4
An oldie but goodie and not made often enough. Really easy to make, you don't have to use panettone but it does make a particularly good pudding. If using a normal loaf, cut off the crusts and throw in a handful of sultanas.
Ingredients
Instructions
3.2.2885
« SQUASH AND ALMOND SOUP
SPICED PARSNIP SOUP »