You are here: Home / Everyday Meals / PORK SHOULDER STEAKS WITH CAPERS AND LEMON 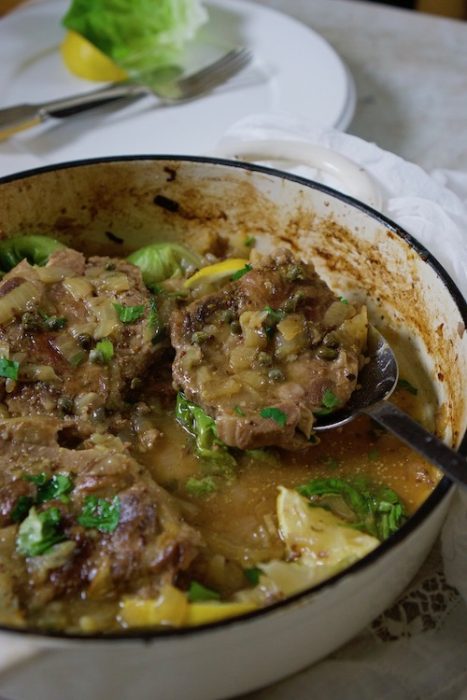 I have been making this dish for some years, it’s originally from a recipe by Nigel Slater, published nearly two decades ago in Real Cooking, but I’ve adapted it slightly over the years, the main change being I use shoulder steaks instead of pork belly.

With meat prices steadily rising and the cuts of meat I used to think of as good value going through the roof, lamb shanks and oxtail spring to mind, cheaper cuts are increasingly getting harder to find. Pork shoulder steaks are still one of the more reasonably priced cuts and if cooked low and slow they make an incredibly good meal. The meat is juicy and tender and this dish has the benefit of the most delicious gravy which can be mopped up with anything you like from mash, crushed boiled potatoes or even as I did here, just with some wilted round lettuce leaves added after it was removed from the oven.

The recipe here is four people. If you are cooking for two, just cook two steaks but the rest of the recipe can be kept the same