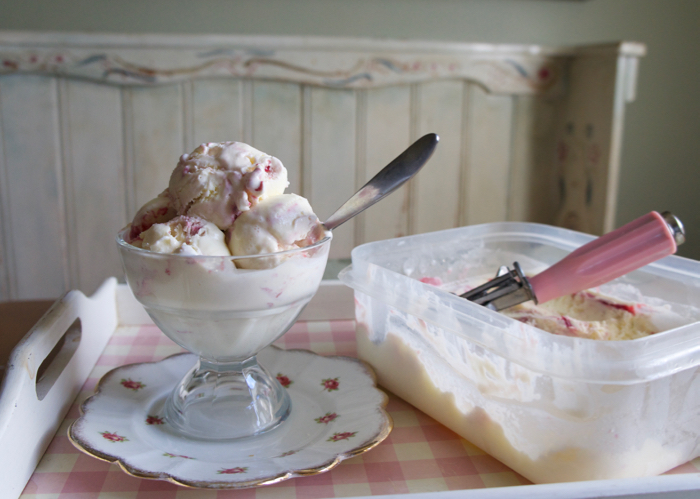 In hindsight, a damp, cold miserable day in February is probably not the best timed post for a frozen dessert, but to be honest the men in my house (one very grown up, and one 11 year old who thinks he is very grown up) do not care what the weather is doing when ice cream is on the menu.

Regular readers may recall I do have an ice cream maker, or to be more precise, my husband is the proud owner of an ice cream maker, bought by me as a Christmas present last year. Well, we all get to benefit so everyone is happy. Actually, when I think more deeply about my slightly mercenary gift buying, I am not sure how happy I would be if my husband bought me a car washing kit or a set of spanners.  Note made to self. 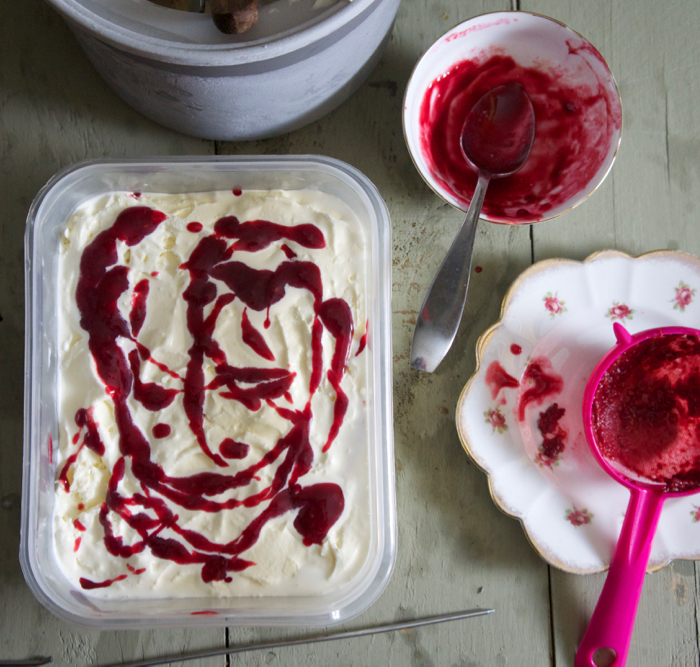 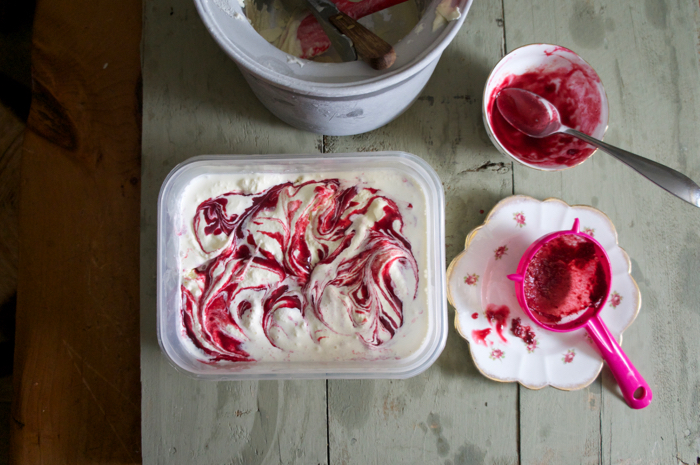 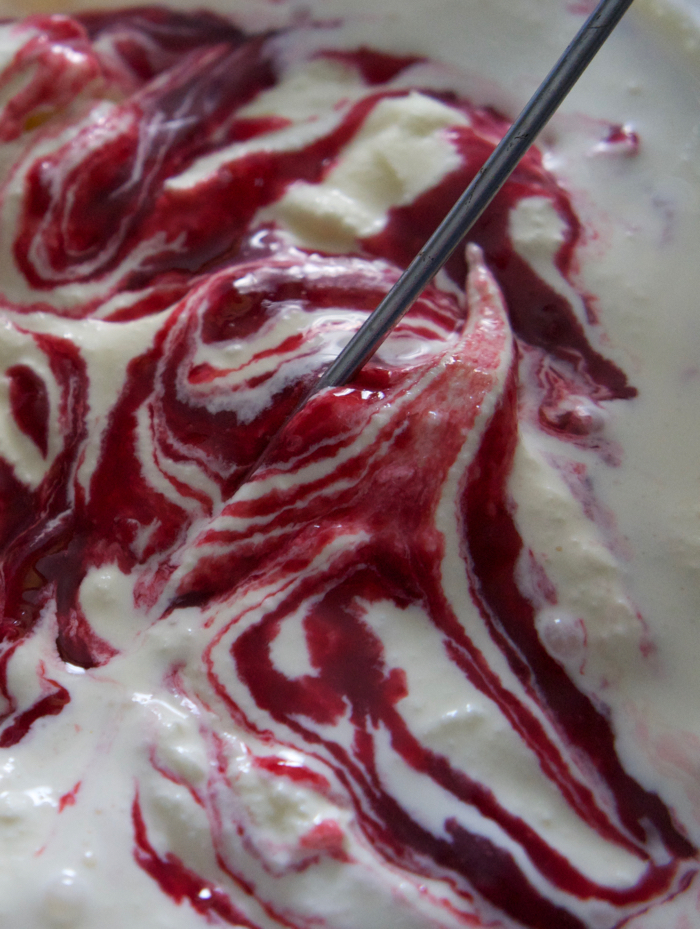 When I bought the ice cream maker I did a little research on the internet and was surprised to find that there are not many to choose from for the home cook. I am always wary of buying the cheapest model on the market as I still hold the perhaps outdated view that you tend to get what you pay for. I opted for a Cuisinart Delux priced at about £70, after this the prices jumped right up into the thousands for the heavy duty commercial versions.

I must admit when it first arrived I was a little unsure about the fact that the mixing bowl part has to be put in the freezer overnight before using. Not being a particularly organised person, I find it a faff having to remember things like that, but I have now got used to popping it in the freezer as soon as it has been cleaned, thereby making it to hand whenever I have an ice cream making whim.

Going off on a tangent, as I usually do, I used to think I was quite an organised sort of bod but have realised since having a child in the house that I am not at all. I am the fraught mother trawling through charity shops and squirrelling out knick knacks from the cupboard under the stairs to make school dressing up outfits the day before they are needed. School letters and forms are always handed in just in the nick of time and I have to be reminded by other mums about school outings lest I forget and my son misses the coach. This is terrible but true –  I have just remembered I need to get a birthday card for my husband whose birthday is coming up shortly (it is actually tomorrow but I feel a bit bad writing that). 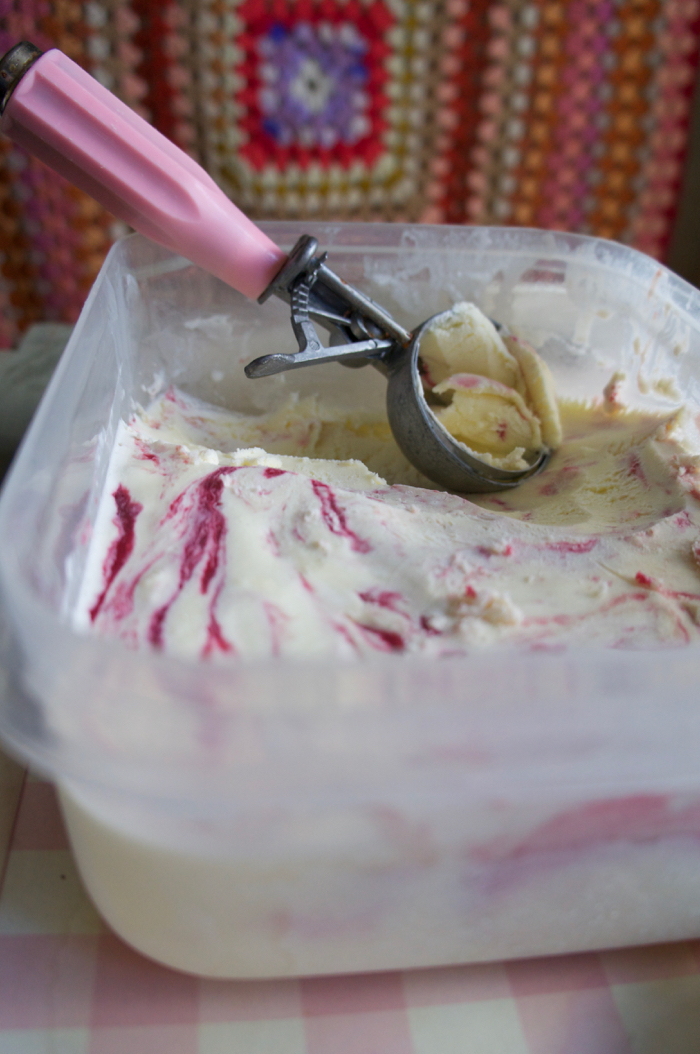 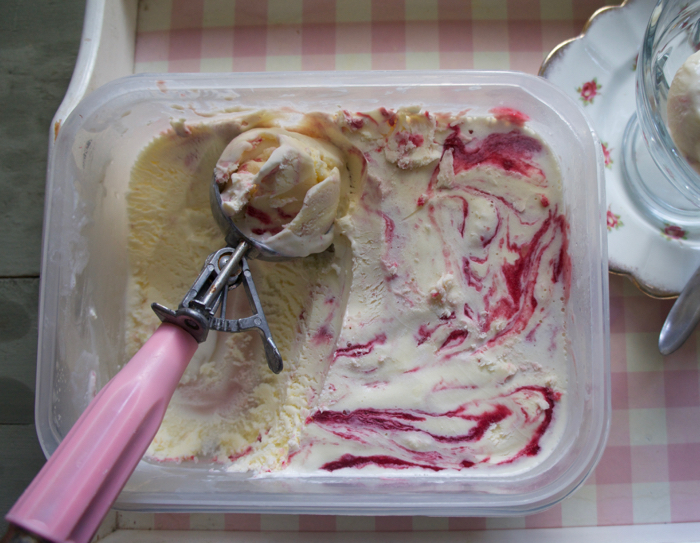 Back to the ice cream maker. Just over a year after purchase, I must say I am still very pleased, all the parts still look like new and I have experienced no problems at all. It is literally child’s play to use, the switch either being ‘on’ or ‘off’, very easy to clean and all in all a great addition to the kitchen.Since having the facility to make ice cream at the drop of a hat, I have acquired the habit of checking the quick sale shelves in the supermarket for reduced cream which luckily for me seems to appear quite regularly. This recipe uses a pint of double cream (600ml) which at normal prices would be about £1.60, so when I spied a tub reduced to 29p, I added it to my basket pretty sharpish.

Just like yoghurt, even when cream has reached its sell by date, as long as it hasn’t been opened and kept in the fridge, it is usually still good for at least another few days, so if you have some in the fridge a couple of days out of date, do open it to check if it is useable before just throwing it away. 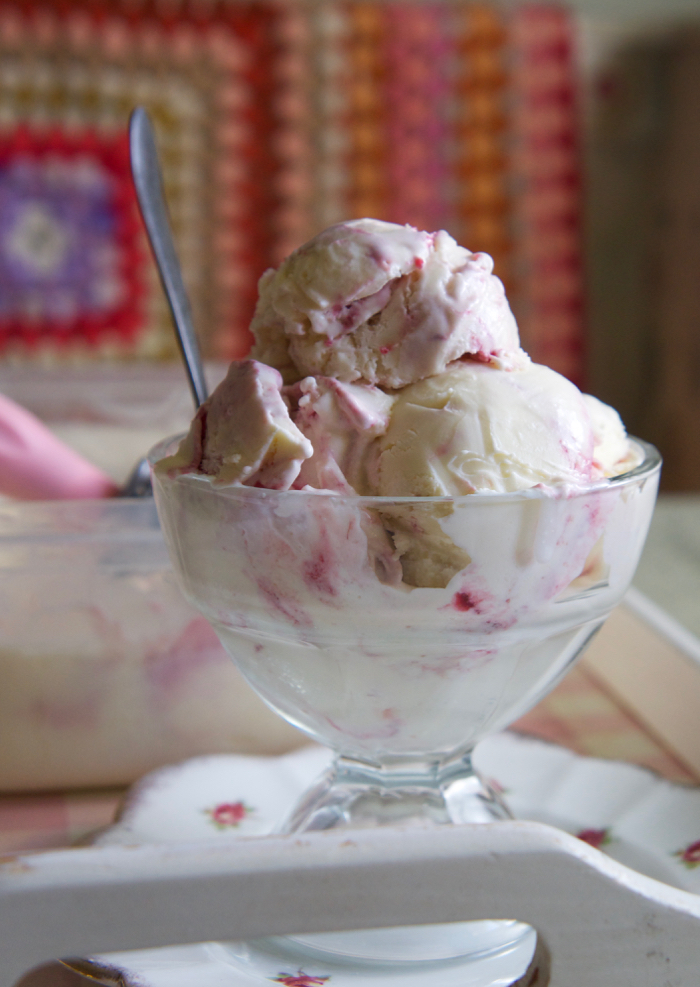 Condensed milk may not be traditionally used to make cream, but the resulting tub of frozen lusciousness is just so fabulously creamy and delicious it is worth having a go if you have not tried it before. For me, it has become my go to method as it is so easy to make and everyone seems to love the end result, whatever the flavour.

If raspberry ripple is not your bag, try adding a large tablespoon of good quality unsweetened cocoa powder to make chocolate ice cream. For extra treat value I sometimes mix in a few chopped up brownies or crushed meringue, you can let your imagination run riot!

Since taking the photos, I have noticed in the second picture down a face in the raspberry juice and now I see it every time I look. My husband thought I had drawn a picture of David Bowie. Spooky.

PS. This is not a paid review in any shape or form, just personal opinion.