You are here: Home / Cheese / TARTIFLETTE 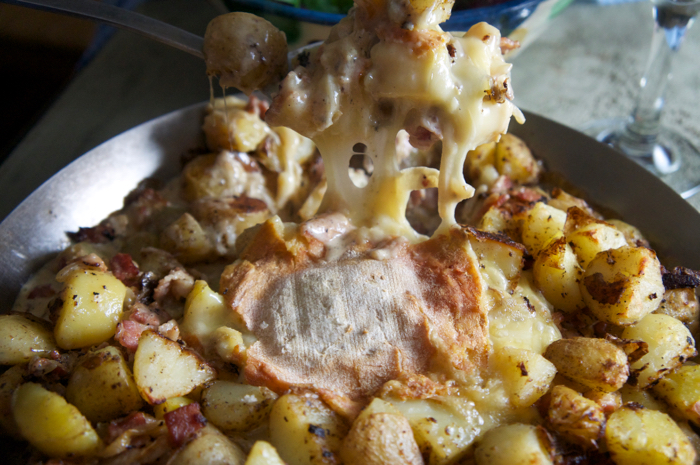 Tartiflette. Such a pretty, dainty word that trips merrily off the tongue. If I did not know its true purpose in life I would think of it as a fragile little pastry, made from the most delicate pâte sucrée filled with silken crème pâtissière, dressed beautifully in a frilly pink case and positioned lovingly in the window of an elegant French pâtisserie.

Nothing could be further from the truth as this dish of potatoes, bacon and pungent Reblochon cheese has nothing refined about it whatsoever. Punchy, hearty, deeply satisfying and just made to be eaten in the depths of winter in a warm kitchen with a cold glass of white wine and good friends.  Certainly not a dish for those of you who are doggedly persevering with a New Year’s weight loss programme. I readily admit I could do with shedding a few (cough cough) stubborn pounds, but January in this house has never been about losing weight. It can be a miserable enough month as it is with rotten weather, sniffles and bills to pay, so when we fancy something rather decadent and extremely comforting to cheer ourselves up, we go for it with gusto. 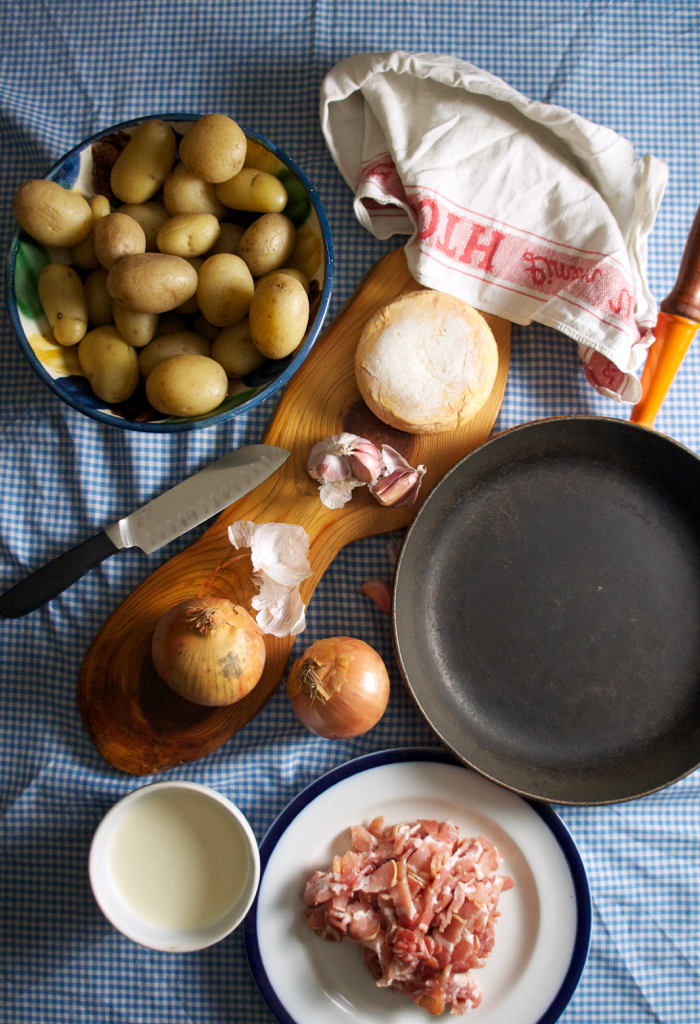 I had an untouched small Reblochon cheese left over from Christmas, its strong aroma wafted out of the fridge every time I opened the door, never failing to remind me it was still there and begging to be used up.

This wonderful creamy cheese from the Haute-Savoie with its amber crust and smooth velvety interior has been made in the region since the 13th century and no doubt its genius paring with potatoes and bacon was discovered long ago by farmers’ wives in the Savoie mountains. However, the name ‘Tartiflette’ is a very much more recent term for this wonderful, smile-inducing dish, being coined as late as the 1980’s. 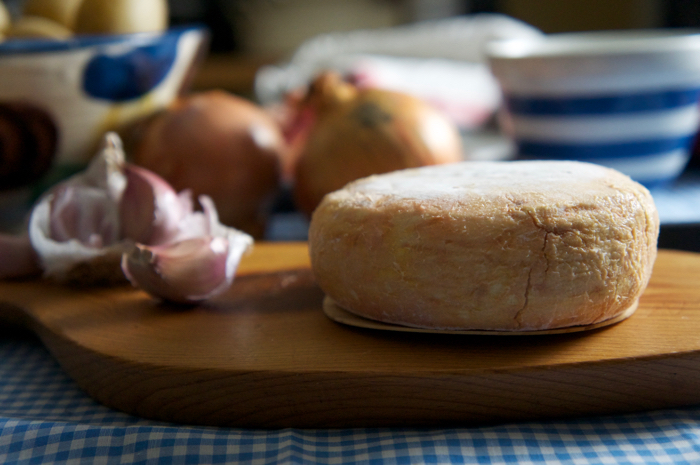 Reading about the history of the cheese conjured up images of a band of Gallic Robin Hoods, out-witting the greedy landowners who charged a tax on milk production. Fed up with handing over all of their very hard-earned cash, come inspection day the canny farmers started to craftily hold back some milk in the cows udder. The thick creamy milk left over was then siphoned off on the QT and made into Reblochon cheese.

Just to add to the romance, the name Reblochon derives from the term ‘Re-blocher’ which translates as ‘to pinch the cow’s udder a second time’. Delightful. 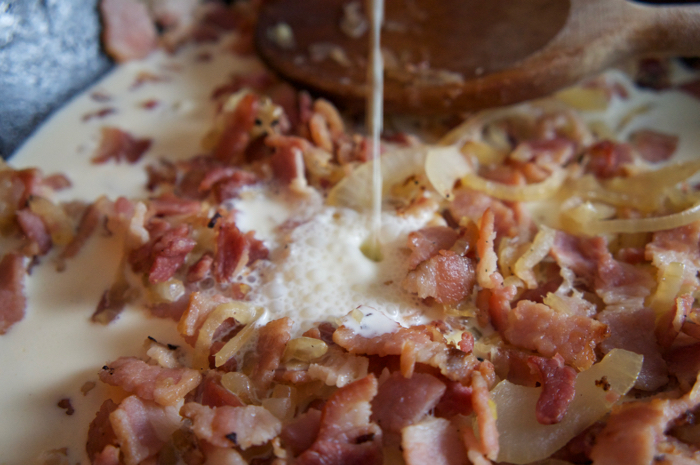 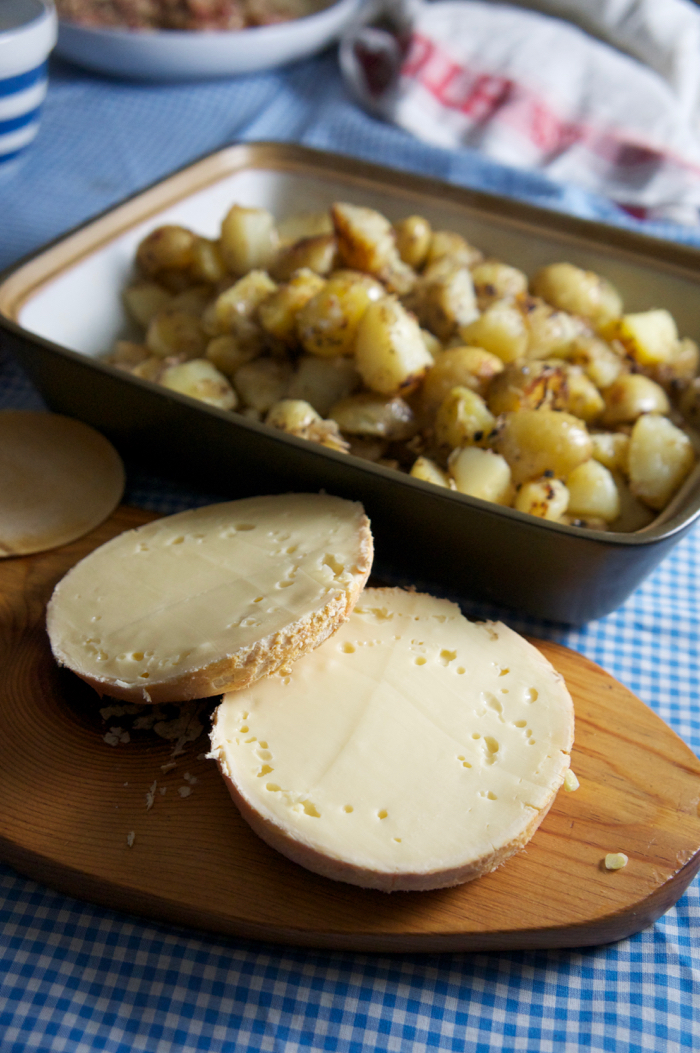 There are so many different recipes and methods for this dish but this is how I do it and it works for me perfectly. I find waxy potatoes work best as they don’t break up like floury varieties which can leave you with a pan of mashed potatoes. Traditionally made with lardons,  a good quality smoked streaky bacon works well as an alternative but I would not substitute the Reblochon cheese for anything else. If you do not have access to a good local cheesemonger, it is sold in Waitrose or Sainsburys and it is definitely worth the effort of sourcing.

As you can imagine, this dish is very rich so it is perfectly accompanied by a plain green salad, anything else would be positively piggish. 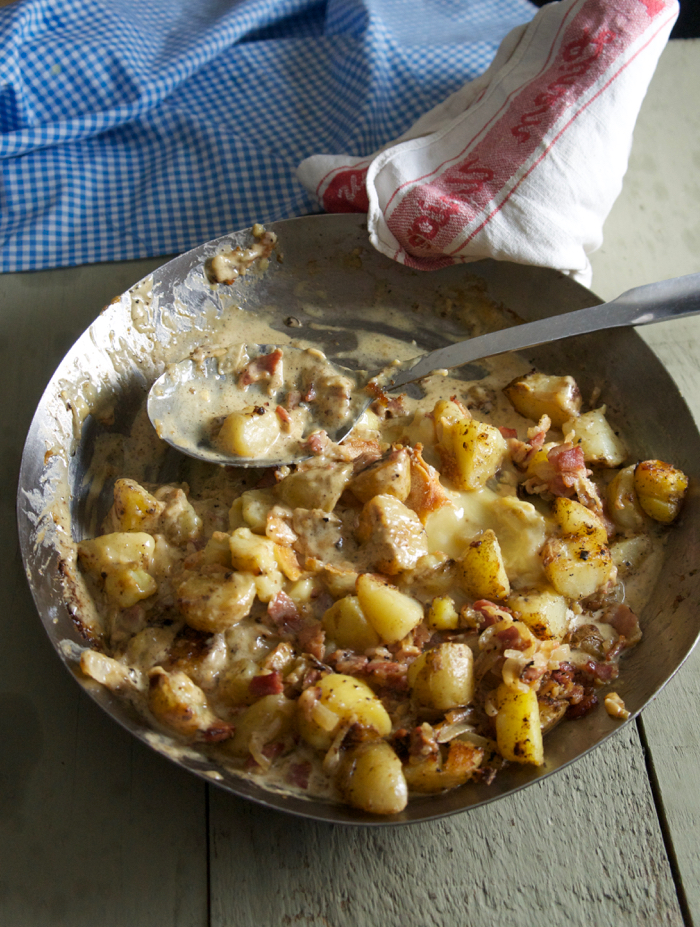 PS. Don’t be tempted to add salt when cooking, the cheese and bacon will be salty enough.