You are here: Home / Food for Friends / ROLLED PORK SHOULDER WITH FENNEL, GARLIC AND ROSEMARY 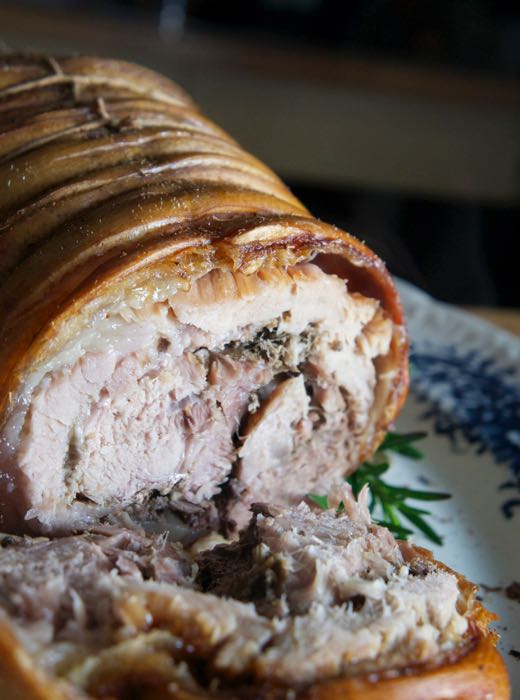 I can think of many apt adjectives that would describe the kind of Christmas I have had, unfortunately ‘merry’ would not be one of them.

Of all the synonyms for merry, cheerful, cheery, joyful, lively, happy, jolly, bubbly and the rest of the myriad of words that are normally be associated with the most wonderful time of the year, the only word I could pick to pin on the proceedings would be ‘lively’ and not for any good reason. Lively in the hectic sense of the word, as opposed to light-hearted banter or convivial jollity filling the air with good wishes for all. 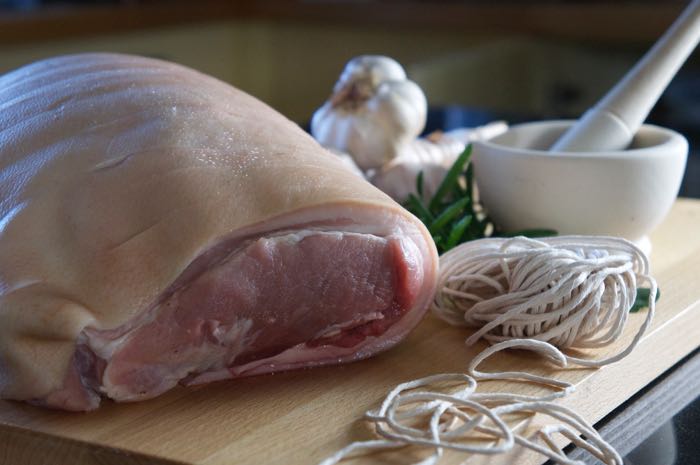 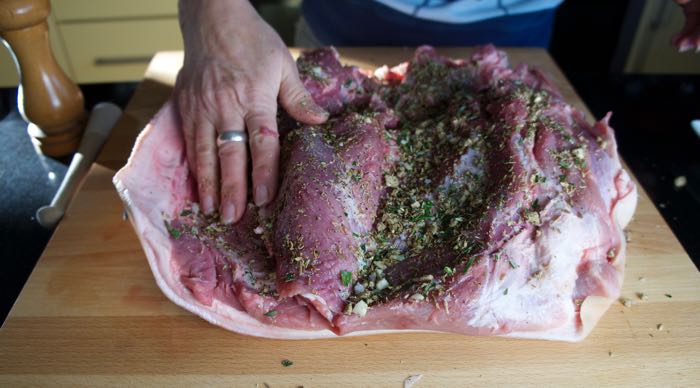 Our house has been like a much blacker, although I must say funnier (in hindsight that is), episode of The Royle Family.

My little family of three, transformed by the presence of my elderly and infirm parents into a slightly larger family of five, has been sitting in the middle of a giant pressure cooker for a week, the steam slowly hissing out of the valve (or up the chimney), getting a little louder and a little more forceful every day until it finally erupted like Mount Vesuvius, very nearly blasting out every single last remnant of Christmas cheer lurking nervously in the shadows under the tree.

It was a few days before the dust eventually settled. We have now returned to our family of three but between us we have an awful lot of dusting and clearing up to do. 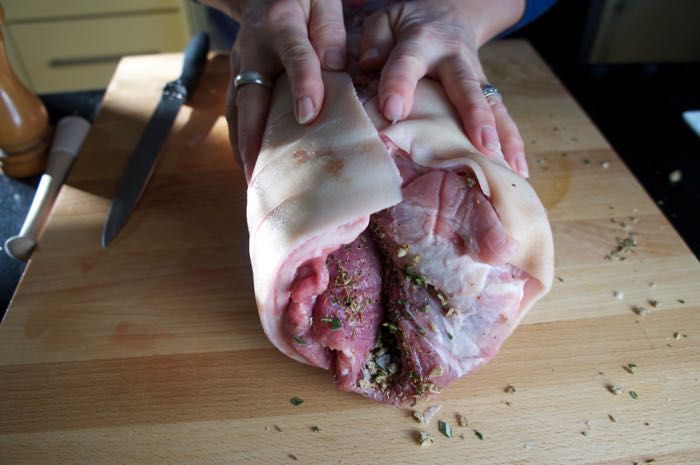 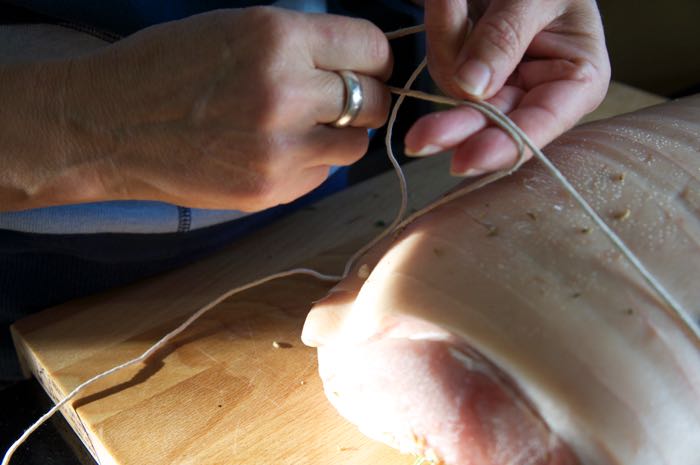 My plans for a wonderful festive holiday full of seasonal cheer was doomed the moment my father arrived, sans hearing aid, the Tuesday before Christmas Eve, having been collected with my mother from their home 90 miles away.

I shall try to set the scene. Busy preparing for the evening meal and trying to stir up some festive jollity by listening to my new Christmas Songs CD (which by the way I still haven’t managed to finish), at the same time attempting to a) play sporadic games of Lego Batman 3 with his nibs. b) Trying to ascertain why my dad in his later years had decided to go for the ageing rock star look and therefore planning a necessary trip to the barbers on Christmas Eve. c) Failing to convince my dementia riddled mother that she is in the right house, I am her daughter and for the 20th time the fridge door does not lead to the downstairs loo.

My father suddenly stopped fussing about me not wearing any slippers and the lack of a television to watch the football, rolled up his jumper sleeve to reveal an arm heavily encased in not one but two bandages, thrust it in front of my face and asked if I could have a look. Unravelling the seemingly endless bandages at a speed normally associated with a six year old unwrapping a pass the parcel I eventually came across my surprise. A huge angry, weeping wound which had been covered by cotton wool, firmly stuck and obviously in need of medical attention. After some heated discussions, my father, stubborn to the last as usual and insisting that all was well, was eventually carted off the doctors where we spent a lovely Christmassy afternoon in the surgery waiting for the nurse who tried as hard as she could to clean the wound and remove the dried cotton wool without bringing tears to my fathers eyes. Dressing applied and with instructions to return a week later, I knew the coming week was not going to be the one either I or my husband had been merrily contemplating. 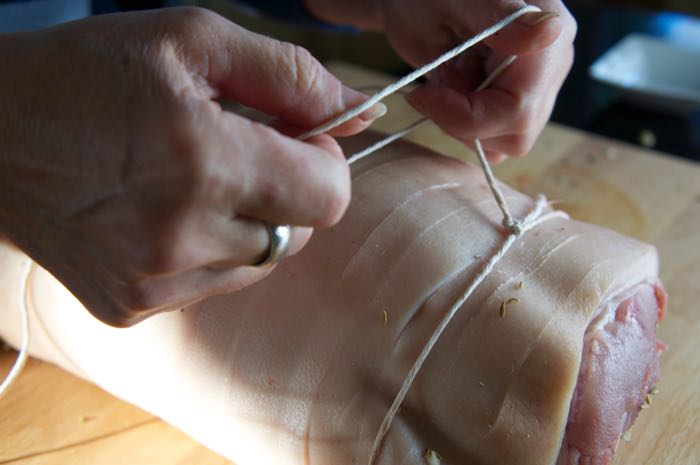 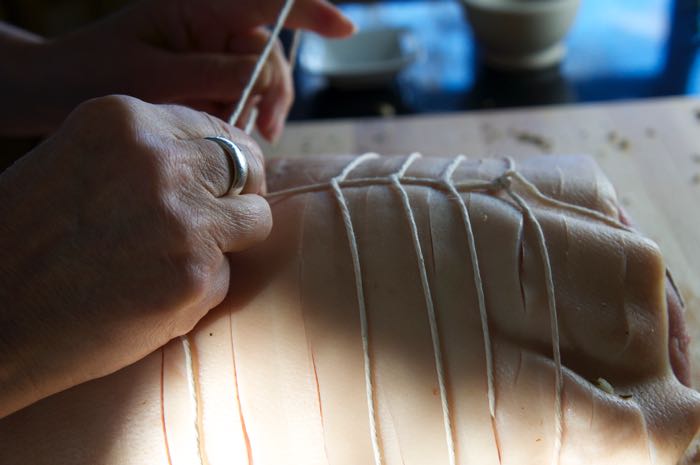 The week has been a miserable barrage of tantrums, tears, arguments (louder than usual due to the missing hearing aid), false hopes, raging frustration and an overall bubbling undercurrent of simmering discontent. It culminated in threats of leaving, living in the shed, and an unused ticket to see The Hobbit.

It seems the atmosphere in the house has for some reason effected the amount of food that has been consumed. Normally by Christmas Eve evening I am panicking about running out of mince pies, even though I normally make no less than 72, ready to come out of the freezer at the drop of a hat, cooked on a high heat for 22 minutes.  Today I have just thrown 10 pies outside for the birds to feast on and I still have two dozen left in the freezer. I am the only one to have had had a slice of Christmas cake, even the large chocolate Leith’s Father Christmas still has his legs and most of his torso left, a telling sign that all is not well chez Dickson. 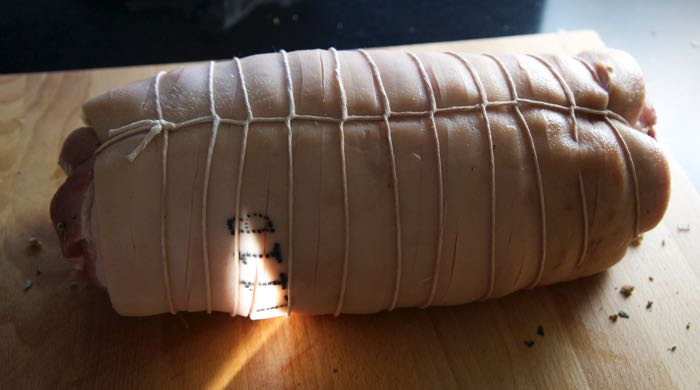 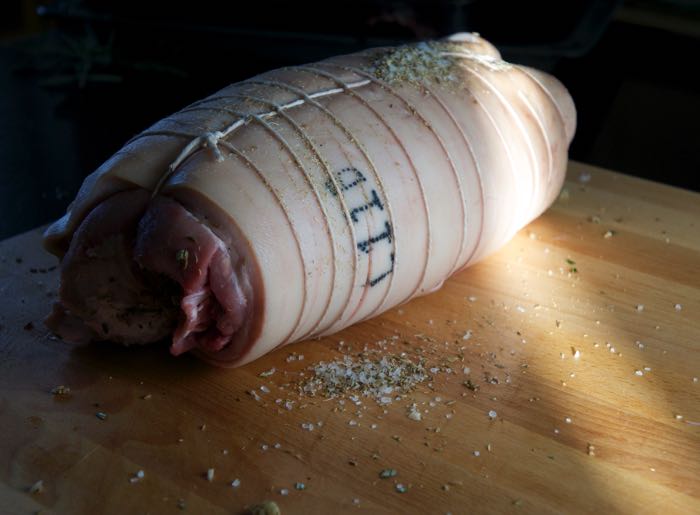 We seem to have hardly touched the turkey and despite this year opting to roast the ham for Christmas Eve dinner, I still have quite a chunk left over which is going into a turkey and ham pie this evening. The turkey bones meanwhile are being simmered for stock which will be used for a variety of soups and risottos.

Even though there have been enough cold meats in the fridge to make several outings served with mash and salad, an easy no fuss meal which I usually relish after the big day, it is the very act of preparing and cooking meals which has kept me sane and by the time Sunday arrived I needed something that was going to keep me busy in the kitchen.

This joint of pork was far too large for five, it would easily have served about 12 people but it will still all get eaten. I gave my parents a large piece to take home which will provide them with an easy lunch for a couple of days and the rest will be turned into a satisfying pork stew, something down the Spanish route with lots of paprika, peppers and of course more garlic.

I found tying the pork really quite therapeutic and the delicious aromas wafting through the house during the long cooking time were enough to sooth the most frazzled of nerves.

The pork was cooked uncovered for five and a half hours. The crackling was quite hard but it provided a well sealed shell for the meat and the resulting pork was extremely tender, juicy and full of flavour. I am a real fan of fennel and use it in quite a lot of dishes but if it is not to your liking it could easily be omitted.

I know there are exhaustive tips and wrinkles on how to get the best crackling, everything from pouring over boiling water, rubbing with oil and different oven temperatures etc. This is how I cook mine, I am not saying it is the best but it works for me. Firstly to get cracking crackling the joint has to have a sufficient covering of rind and fat. Buy organic or free range if you can but at least outdoor reared where the pigs are born outside and spend about half of their lives. Outdoor bred means just that, born outside but moved indoors once they are weaned after about 4 weeks. I personally will not buy or eat any factory farmed pork where neither breeding sows or piglets ever feel the outdoor soil under their feet. 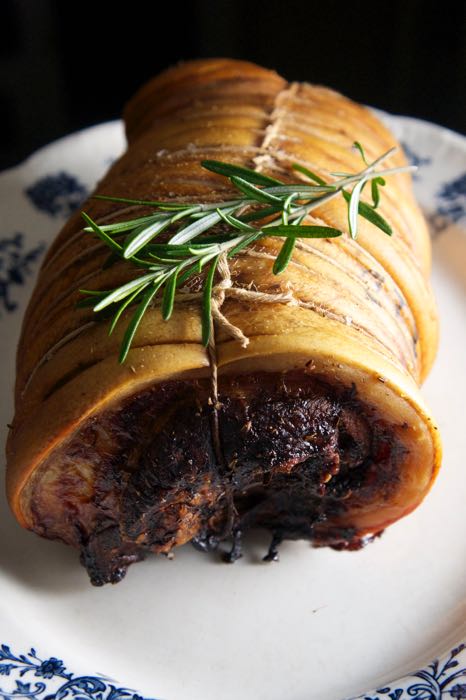 If the rind has not been scored or done a bit haphazardly, score all the way round and in neat lines with a very sharp knife.

If the rind is wet when it goes in the oven it hasn’t got much chance of going crispy so wipe it over with a paper towel to remove any moisture. I have found with a good joint the rind should not need any oiling, but I do apply a rub of sea salt and in this particular instance mixed with a tablespoon of crushed fennel seeds.

It was a lovely meal, tensions were eased, maybe the wine helped, but things are now getting back to normal. Whatever that is!

Apologies to anyone who has been waiting for a new post. I am now back on track and once the school holidays are over I will be back to normal and rearing to go.

Happy New Year to everyone, hopefully 2015 will be a good year for us all.

Print
ROLLED PORK SHOULDER WITH FENNEL, GARLIC AND ROSEMARY
Author: Lindsey Dickson
Prep time:  30 mins
Cook time:  5 hours
Total time:  5 hours 30 mins
Serves: 12
Once mastered, tying up a joint is quite easy, there are many videos on You Tube. Obviously a smaller joint can be used. A 2k joint will take about 3-4 hours.
Ingredients
Instructions
3.2.2885
« MERINGUE ROULADE
TRADITIONAL ROAST RIB OF BEEF »