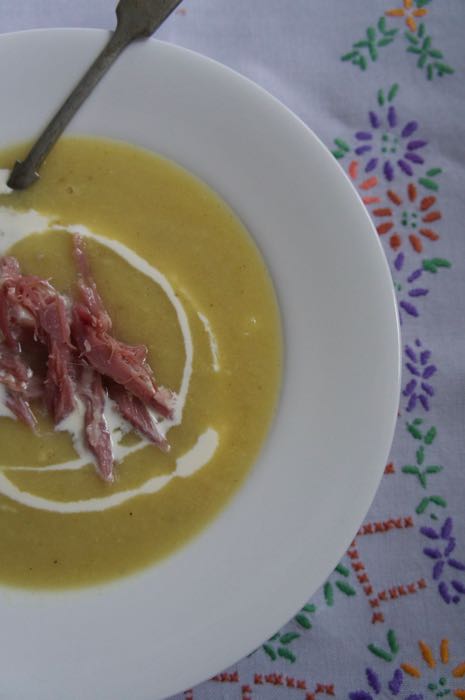 It really was a weekend made for soup. The rain has been relentless which has sort of matched my mood although I have spent some time looking through photographs of summer days out with friends and these have made me smile several times. That and finding two long-lost, very good old friends on Facebook has cheered me up and I am looking forward to the week ahead with a bit more spring in my step than last.

This soup is not too spicy, it leaves a lingering heat in the throat which gives it an even more warming quality. I alway add the cream after serving as opposed to while it is still in the saucepan as I like to see the little white swirl on top, something simple but it pleases the aesthete in me (I’m sure there’s one in there somewhere, although as I also like the look of a chocolate eclair perhaps that disqualifies me).

As we were all very hungry, I added some shreds of ham from the hock I used to make the stock, it just made it that little bit more filling . My son had a bowlful with a strong cheddar cheese grated over the top which was delicious, although I think this was more on his part to try to disguise the spiciness,  his young palate being not quite as accustomed to heat as us grownups.  I enjoy cheese with most soups, as long as it melts in to make the soup even more delicious I don’t mind really what it is, usually a case what what is in the cheese box. 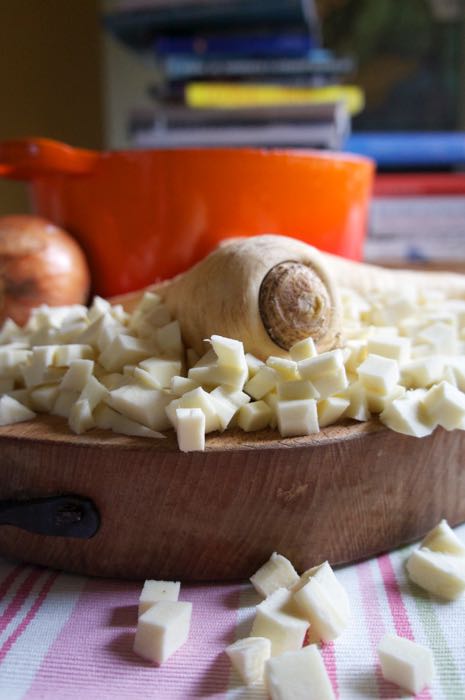 For weekend lunches, served with a chunk of bread or crusty roll soups are hard to beat as a cheap but extremely satisfying and tasty meal for hungry and chilly bones. This soup was made from half the stock produced from simmering a ham hock for a few hours, resulting in a very tasty and gelatinous stock. This spiced parsnip soup is simplicity itself requiring no other vegetables than an onion and a few parsnips.

It took a few minutes to reheat after we returned wet and soggy from a morning at Elveden Estate Christmas Fair. The roads were so full of water they had to close early which is such a shame for both the organisers and stall holders who reply on these Christmas events to make some hard earned cash for their wares. 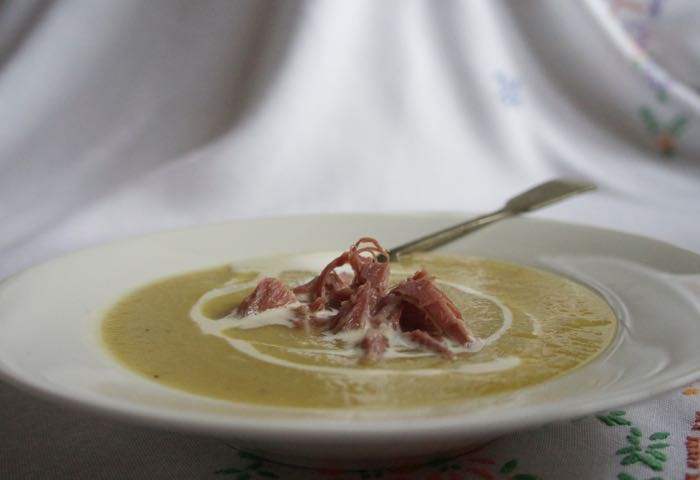 My favourite thing spotted at the Christmas Fair was this little blue pot by Andrea Young at Wattlefield Pottery, it’s zingy blue glaze shone out at me as a I walked past, making me stop to look at her other pieces. Andrea works from her studio in in Wattlefield in rural norfolk, and her inspiration comes from the traditional pieces used to collect herbs spices and flowers from country gardens. She can be found next at a pop-up shop on 27th November at Barclays Bank in Dereham between 10-3. Andrea can be contacted on 01953 788816 or visit her website www.wattlefieldpottery.co.uk to view more of her work. 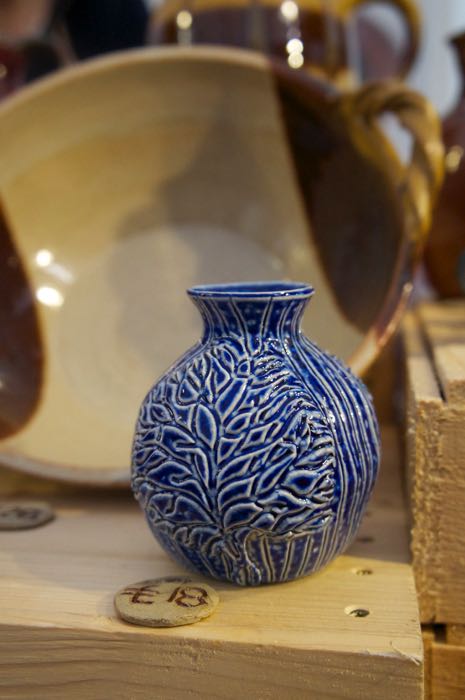 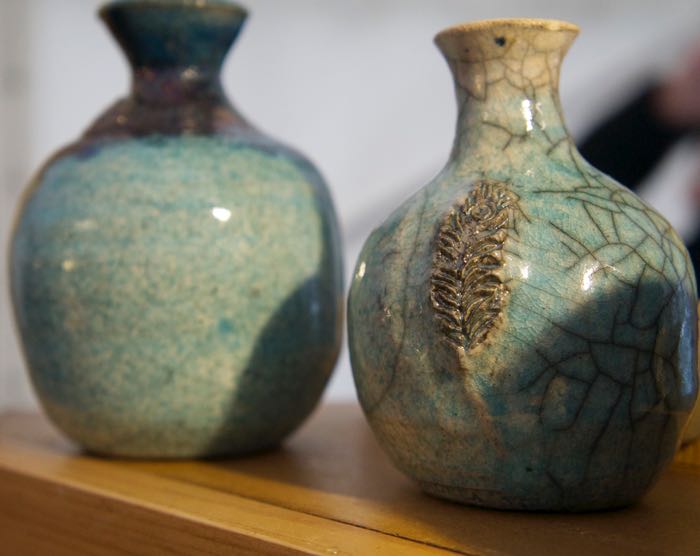 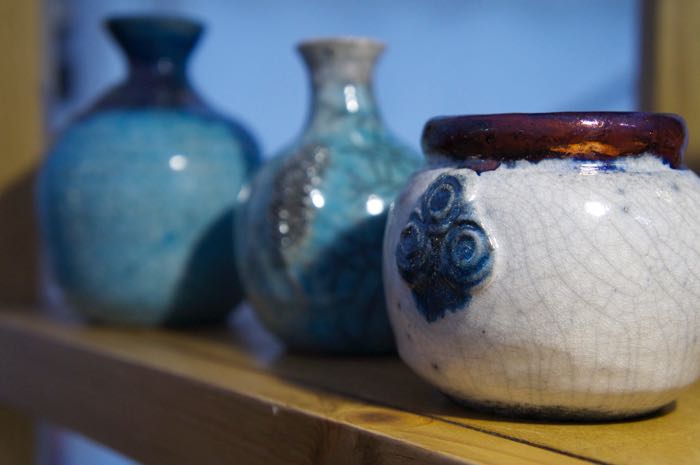 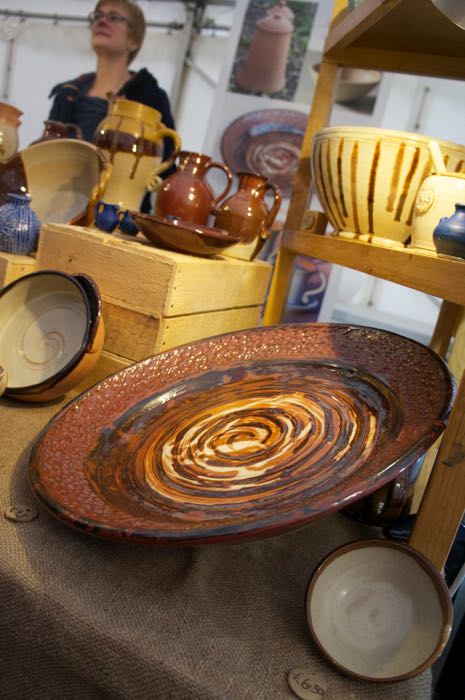 Although damp and dreary, we soon all cheered up after our delicious soup and our spirits lifted even more when could smell the joint of pork roasting in the oven for our dinner later on. The lusciously fatty piece of pork we bought at Elveden Farm Shop proved to be worth getting soaked for, the crackling was heavenly, plates had to be guarded at all times to stop thieving fingers. A good Sunday was had by all.

Sorry, had to post a picture of the pork.. 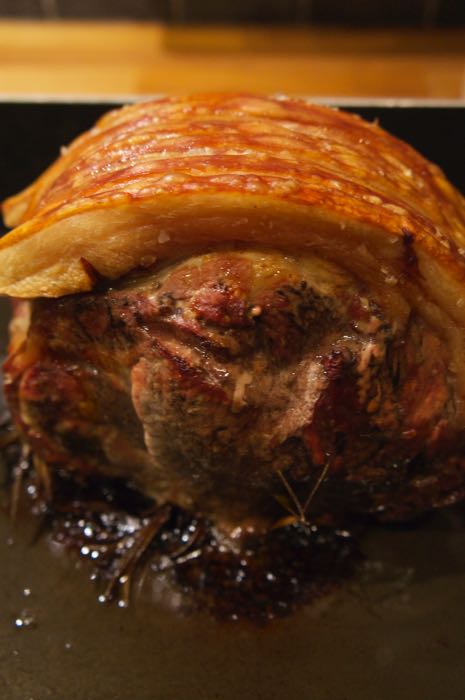