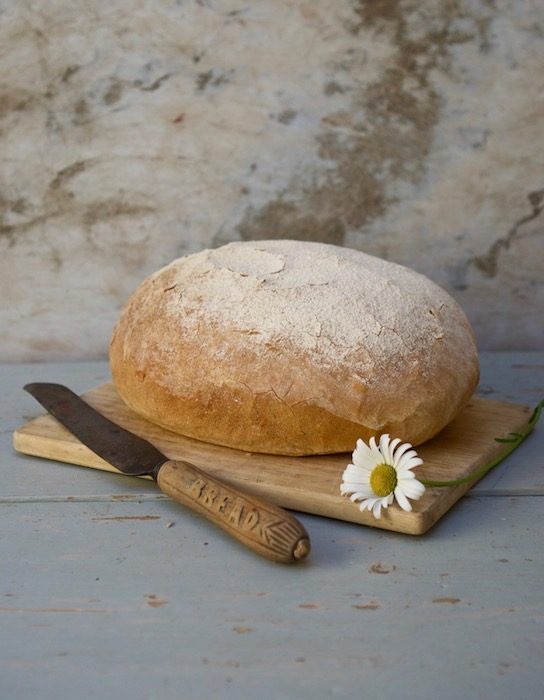 This article is by Michael Dickson, Lindsey’s other half.

OK, I’ll admit it, I’m a bread nerd…. This isn’t a recently acquired nerdiness however, but something that has been simmering in me since the age of around eight, before bursting out fully formed at the age of  40. The blame can be placed firmly at the feet of my grandmother Elizabeth Dickson who realised at some stage during the 1960s there was money to be saved by baking her own basic white loaf, at home.

With hindsight, it’s clear to me my grandmother’s overwhelming priority was cost-saving. A chore that in the end would save her money and yet maybe improve the quality of the daily loaf available to her family. This is not to say that considerable effort was not put in to the weekly endeavour of bread-making. A whole morning was set aside to make the 2, 4 or 6 loaves for the following week or fortnight. She would be lost for that time in a cloud of flour surrounded by a clatter of tins, the grinding whirr of an ancient Kenwood Chef and the rustling of pre-oiled plastic bags in to which the loaves would be placed to rise.

Nan’s bread had one thing going for it, consistency. The loaves always, without fail, turned out over-yeasted, over-kneaded, under-risen, under-sized and over-baked. But they turned out consistently so, always.

This makes it sound like I’m complaining, but I’m not. As I said earlier, this story is being written while gazing through the rose-tinted prism of hindsight. At the time of baking, in the 60s and 70s, the aroma of fresh baked bread wafting from the tiny council-flat kitchen was pure heaven and despite its shortcomings was still miles better the the Sunblest/Mother’s Pride stuff everyone else seemed to be eating. While the bread itself could be a challenge if you tried to make a sandwich with it (think thickish beer-mats), it made the best toast ever. So good was the toast I still use the memory of it as my benchmark for toast-quality when eating out (Nan’s toast is a default 10 out 10).

Toast is one thing, a sandwich is quite another and as my grandmother was clearly not the person to ask for sandwich-loaf bread-making tips, I was left to my own devices to experiment until I managed to get it right, consistently. The recipe below manages to achieve a result that alluded my lovely grandmother until the day she died, a tasty, soft loaf that stays fresh for a few days and thereafter makes perfect toast. It’s taken years of experimentation and practice to get it right and having done so, I’ll be saving you, lots of time. I’ve never known this recipe to fail.

I’d like to think that when my grandmother and I meet again in bread Valhalla, she’ll greet me with a welcoming smile on her face and I’ll have the loaf made using the method below tucked under my arm and be grinning broadly from ear-to-ear. Enjoy.