You are here: Home / Chicken / THE BEST SIMPLE ROAST CHICKEN 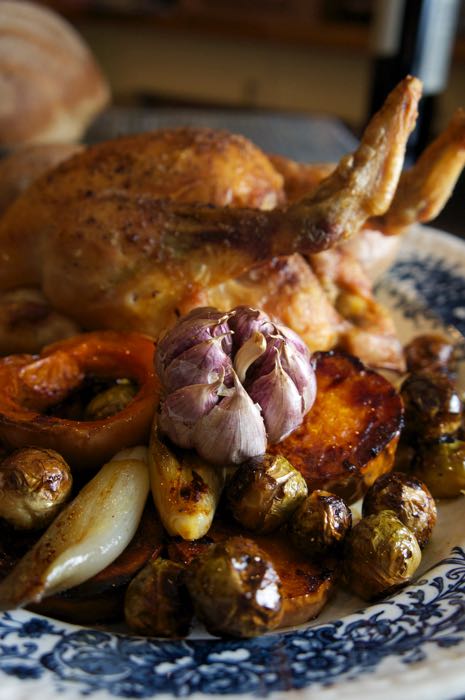 I have written about the beauty of a roast chicken in previous posts but every time I eat it I find it so delicious it always starts me thinking about what is really my favourite meat. Most people don’t even think of the humble chicken as a treat any more. It has become so cheap a commodity that it is treated with the same respect as a poor quality burger and the processing of the meat has reduced it to a product only slightly more natural than analogue cheese.

The so called industrial ‘plastic chicken’ that makes its way into pies, curries and the local takeaway is so far removed from the beautiful, mouthwatering roasted bird that used to the the pride of place on the Sunday dinner table it is a travesty. 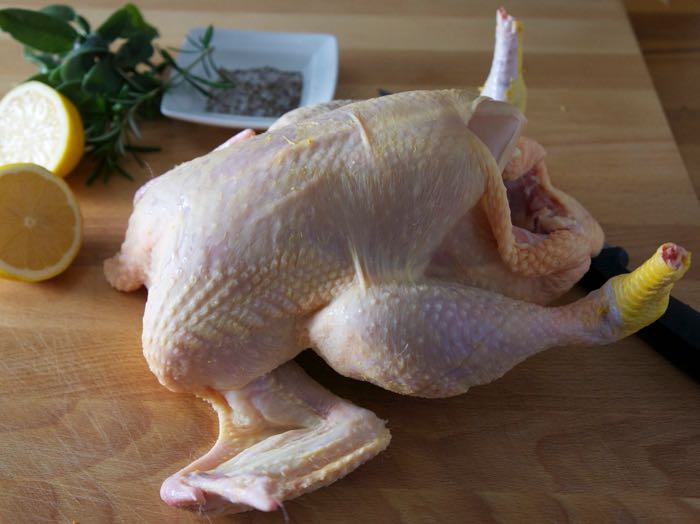 Personally I won’t eat any chicken unless I know where it has come from and how it was reared. I won’t eat any takeaways containing ‘chicken’, knowing that it has probably originated from Thailand then travelled via Belgium or Holland, picking up more than a few additives of chemicals, water and maybe even a bit a pork DNA along the way.

Nando’s is a no-no, you wouldn’t get me stepping a foot inside the door, likewise any other establishment that served anything less than free range chicken.

Nando’s state that ‘Chicken welfare is of utmost importance however we also need to consider the price our customers are willing to pay’. Companies House accounts show that Nando’s Group Holdings, which runs the chain in the UK and Ireland, generated turnover of £535m in the year to February 23 2014, so their customers are obviously willing to pay quite a lot for a chicken that’s never seen the light of day or scratched around in the dirt. 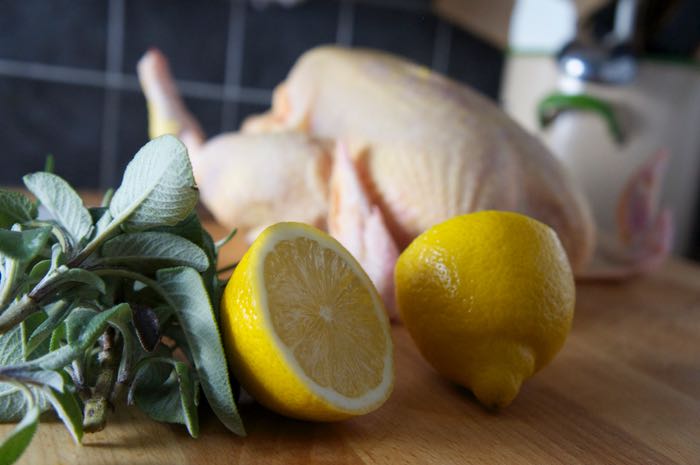 A chicken is an animal. It’s not a factory produced lump of white rubber like substance made for our cheap eating pleasure. Well, it is actually, because that’s what people are knowingly or unknowingly gobbling up by the truckload every day.

Originating from a live creature who spent its mere miserable six weeks of life in a space less than half the size of my computer screen. Reared, which seems too kind a word as it invokes at least some sense of nurture, by the tens of thousands at a time in squalid conditions then processed in factories who seemingly pay lip service to biosecurity but actually regularly fall short of the strict guidelines and processes in place.

I love my chicken but reading about the production line de-feathering, gutting and washing processes is enough to turn anyone vegetarian. In 2014 a Foods Standards Agency survey reported that in one chicken processing plant in Scunthorpe (supplying Tesco, Sainsbury’s KFC and Aldi) , 61% of chickens tested positive for campylobacter. Information from whistleblowers hit the headlines and for a while the chicken industry was put under the spotlight with rumblings from from Sainburys, Tesco and Marks and Spencer who launched their own investigations into chicken sourcing. 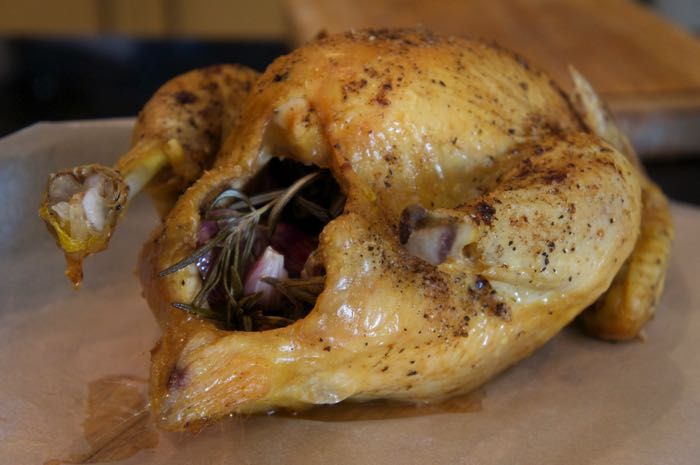 However, a promise by The FSA last year to name and shame supermarkets and processors for their campylobacter rates was mothballed after a source revealed that the government was worried about starting a food scare similar to the disastrous egg and salmonella debacle in 1988.

If chicken wasn’t so cheap may be everyone would start to treat it more like a beautiful joint of beef, to be cooked with love and enjoyed as a meal worthy of being accompanied by a good bottle of wine.

Apologies if I am repeating myself but a £10.00 chicken will feed a family of four for more than one meal. There are only three of us but from a chicken we will have a roast, the next day maybe a risotto and then I will boil the carcass for a stock to make soup.

A cheap chicken will not inspire someone to use it wisely and value it. After the roast and the best bits have been eaten, the rest in all likelihood will get chucked in the bin with the rest of the wasted leftovers.

I  have a old cookery book from 1971 by Antoine Gilly called Feast of France and I think this passage sums up how I feel about chicken.

He writes ‘I judge the culinary talent of a restaurant (or home) according to the way in which it cooks and serves chicken. Supposedly a simple dish, it is one seldom cooked properly. I find it strange that few do well with what I place high on the list of the best foods of all foods. Probably because chickens are so reasonable in price, too many of us treat them as ordinary when they (and all poultry) are truly extraordinary.’  I couldn’t say it better and it is a statement very true to my own heart. 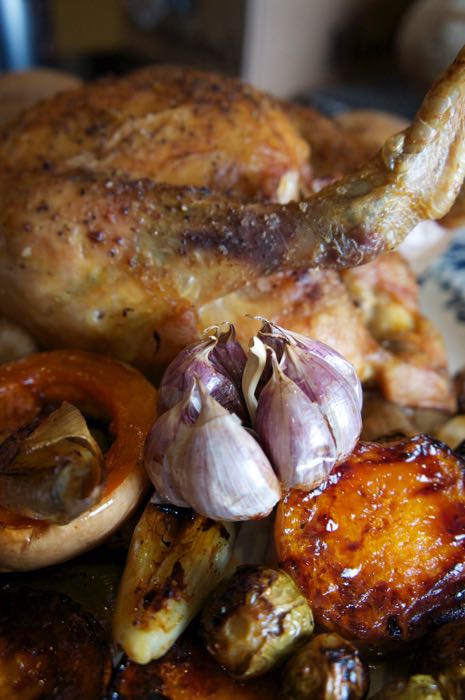 This is how I roast my chicken. It always turns out full of moist juices, crispy skin and full of flavour.

Sometimes I roast it purely by itself, but usually, especially for mid-week ease and speed, I tuck it up with whatever vegetables I have that roast well. Squash, fennel, onions or shallots, peppers, carrots, little potatoes and even sprouts. If ,like us ,you are garlic mad, whole heads of garlic will roast down to sweet little pods of gooey deliciousness.

It has taken me far too long to realise a good investment for the kitchen is a digital thermometer. After years of wobbling chicken legs, pressing lumps of meat and checking for the colour of juices, I would heartily recommend a thermometer to take out all the stressful guesswork. I find I use mine all the time for meat cookery and it is invaluable for cooking on the BBQ. No more worrying about undercooked burgers and the like.