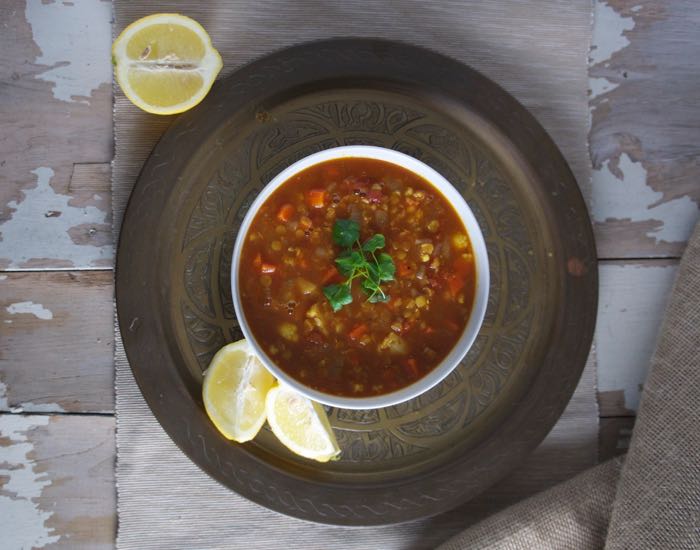 A true winter warmer if there there was one, providing a delicious comforting bowl of goodness with just the right amount of heat to tingle the tastebuds.

Way back in 1968, after Claudia Roden introduced us to the delights of Middle Eastern cookery in A Book of Middle Eastern Food, the British were suddenly woken up to a world of exotic flavours, far exceeding the wicked temptations of Fry’s Turkish Delight.  Hummus, couscous and tabbouleh, once the preserve of the ‘hippy’ vegetarians, were soon to become household names.

Over the ensuing years the passion of chefs and food writers such as Greg and Lucy Malouf, Arto der Haroutunian, Yotam Ottolenghi and more recently Sabrina Ghayour, Ghillie Basan and Rawia Bishara with their beautiful and informative cookery books have ensured the nation has well and truly embraced this wonderful cuisine.

Thanks to these and others, the ever increasing popularity of Middle Eastern cookery in the UK now enables us to buy delights like pomegranate syrup and pickled lemons along with spices such as ras-el-hanout, za’atar and chermoula. Being stuck out in the Suffolk sticks, I do still struggle to find some things locally but the internet is a marvellous source for hard to find ingredients, no matter what corner of the globe they originate from.

Personally, my first real taste of Middle Eastern cookery was in the early 1980’s when I spent a year on a Kibbutz in Israel. Advocados, a somewhat expensive luxury at home and usually reserved as a special occasion starter filled with prawns and Marie Rose sauce, were eaten in copious amounts every day. At night we used to make toast by putting bread into the bar heater on the wall in our little room and mash creamy advocados on top for a delicious midnight snack. If there was cheese available too so much the better. Advocados with cheese on toast is still one of my all time favourite snacks.

Dishes made with plump, purple aubergines (eggplant), a vegetable which never appeared in my mother’s very British kitchen, seemed to accompany everything. The huge amount of fresh salads eaten on a daily basis were an eye-opener on another way of  culinary life, a far cry from the offerings of iceberg lettuce and cucumber that constituted a salad in England. Spicy falafel purchased from street vendors created a new taste sensation for me and opened up another adventure into the amazing tastes of world cooking.

Whilst in Israel I met people from all over, places as far apart and different as Scandinavia and South America. It really was a magical experience for myself and I’m sure for many, many people young people who travelled to a country far from home to experience a different way of life. Much like the incredible array of gap year opportunities available now thirty years on, it was an adventure undertaken by thousands of youngsters with a yearning to find out a little bit more about themselves and the world.

My ‘job’ whilst there was working in the huge milking shed, a task snapped up by me but rejected by others because of the strong smell of the cows, the first assault on the senses noticed when entering the Kibbutz gates. The real reason I think nobody else wanted to do the job were the hours, the early start put off most teenagers who liked to have a few beers in the evening after a hard day picking oranges or plucking turkeys.

Before the 4.00am shift started every day, breakfast was a huge omelette made in the cockroach infested cowshed kitchen and eaten with the men. A varied selection of wiry, tough and burly old hands who, once I had been there a while and proved my worth, told me they had waged a bet between themselves that I, at the time a small slip of a girl, wouldn’t last more than a week. I don’t know what they thought would finish me off first, the tough, heavy work, stinking of cow poo and wee, the insect life or their incessant sexist banter but I stuck it until I came home and absolutely loved every minute of it. I was finished by 10.00am which gave me time for another hearty breakfast, usually advocados, more eggs and toast in the massive expanse that was the Kibbutz canteen. After a much needed shower, the day was my own which usually involved hitching a lift down to Netanya beach. An activity I thought best not to tell my father about.

Cooking has changed beyond the realms of most people’s imaginations during the last half century or so, when even something as basic as garlic was considered by many ‘foreign’ and generally a rather smelly creature. Olive oil was something people put in their ears and had to be bought from the chemist in a little bottle that probably now wouldn’t get me through the day.

Although I love to celebrate the traditional meals and cooking of my youth, born out of my mother’s very English culinary repertoire, the incredible variety of food and produce available to us is something I am very grateful for. I spend many pleasurable hours sifting through old and new cookery books, looking at recipes I can now actually cook, not just dream about.

This soup, like a lot of my cooking, came about from the need to use something up, in this case, a saucepan of chicken stock made from the previous week’s roast chicken and half a cauliflower that otherwise would have been consigned to the compost bin.

Very easy to make and no blitzing necessary, making it very simple and hassle free.

Print
SPICY MOROCCAN LENTIL AND VEGETABLE SOUP
Author: Lindsey Dickson
Prep time:  15 mins
Cook time:  45 mins
Total time:  1 hour
Serves: 4-6
This soup will not be blitzed so chop the vegetables as small as you like them in a soup.
Ingredients
Instructions
3.2.2885
« HUEVOS RANCHEROS
SPICED SLOW ROAST SHOULDER OF LAMB »