You are here: Home / Everyday Meals / HAM AND STILTON TART 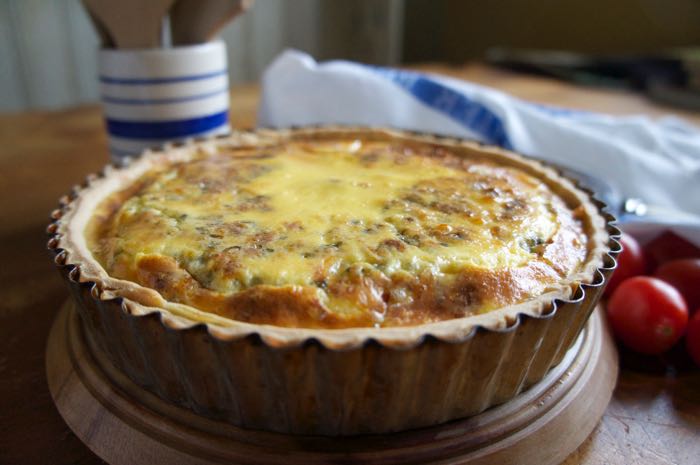 I feel sorry for the Quiche Lorraine. It is one of those dishes, so sublime in its simplicity that it was smuggled out of its homeland of Lorraine way back probably sometime in the fifteen hundreds, rarely to be seen again in its pure form. Bastardised over the ensuing centuries, it ended up as party fodder for the masses in 1960’s England.  A shadow of its former self, this magnificent tart became a soggy, bland, tasteless offering, served far too cold straight out of its foil tin onto a buffet plate, next to the undercooked sausage rolls and curled up cheese sandwiches.

Its popularity as a party dish grew in strength throughout the seventies and then at its height of fame it almost became a victim of its own success when the book Real Men Don’t Eat Quiche was published in 1982, mocking the male quiche eater as bit of a wimp and, heaven forbid, a man who might even do the washing up. 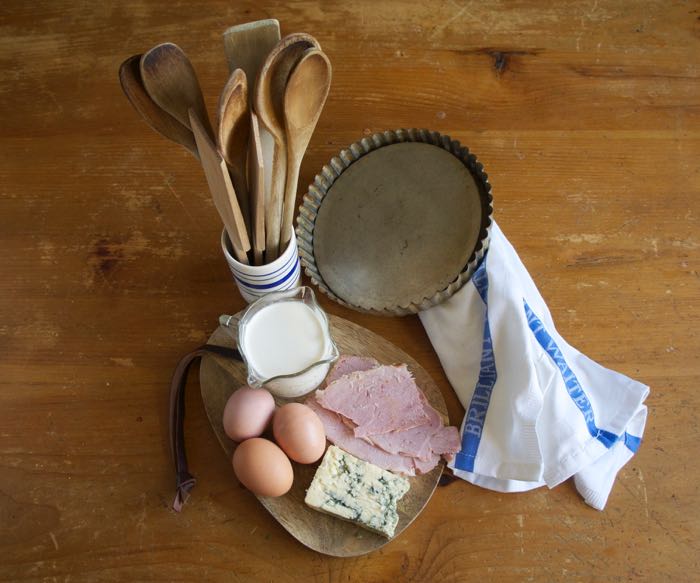 Sadly, it didn’t ever seem to recover from the insults and although still popular for buffets and the like, it was never to be the party piece again. No longer the trendy show-stopper, its worth was relegated to table filler, bought in at the last minute to fill any gaps in between the sour cream dip and pineapple hedgehog. A bit like a fading film star, always at the party but no longer the centre of attention.

The three original ingredients of smoky Alsace and Lorraine bacon, cream and eggs take a lot of beating and if your last taste of a Quiche Lorraine was a shop bought, oven ready variety, I would heartily recommend that you try a homemade one. Personally I have never strayed far from the recipe I was taught at school in the 1970’s which is the same as the Elizabeth David version from her seminal book French Provincial Cooking. Just snip up six rashers of smoked streaky bacon, gently fry until just cooked. When cooled tip into a pastry case and cover with a mixture of 1/2 pint double cream, one whole egg and three egg yolks. Cook as in the instructions for my Ham and Stilton Tart. 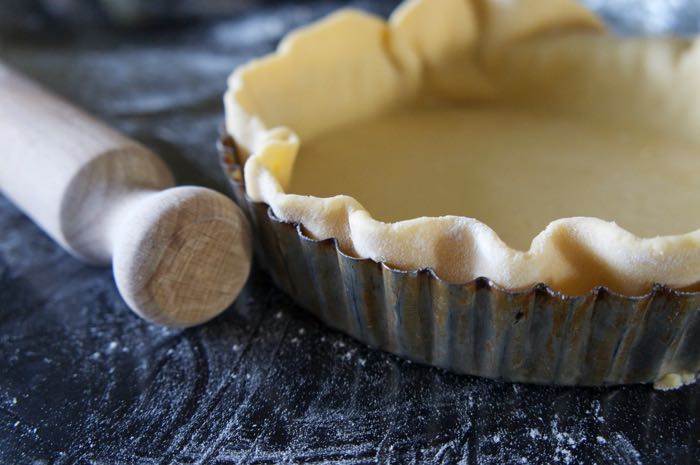 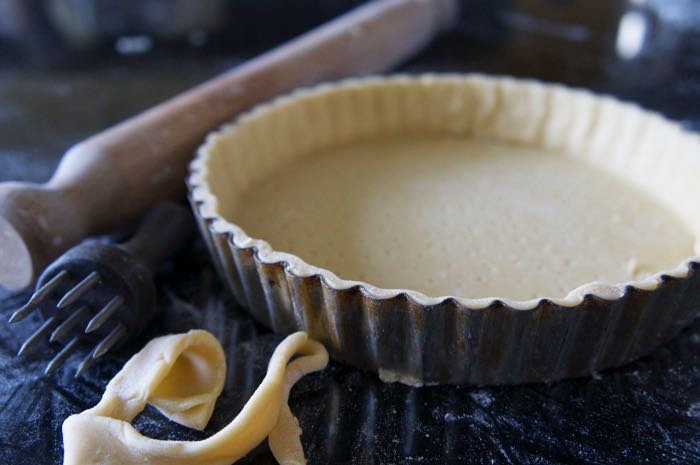 I made this tart with some Stilton left over from Christmas and ham off the bone that I had available. You could swap the ham for some lightly cooked bacon if this is more convenient. If you do use bacon, do not fry it until it is crispy, it only needs to just cook out the rawness. 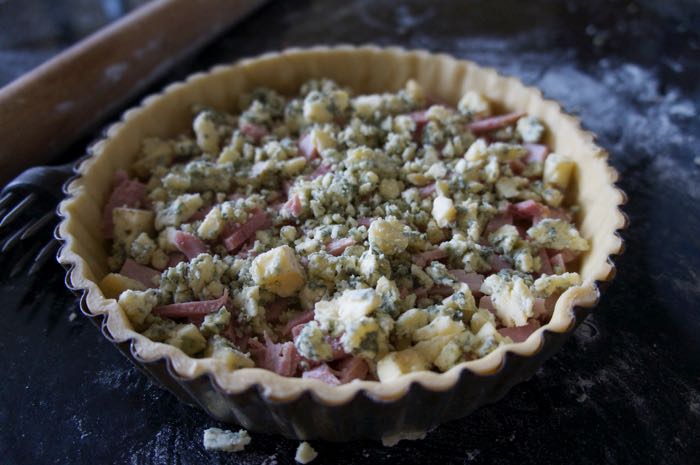 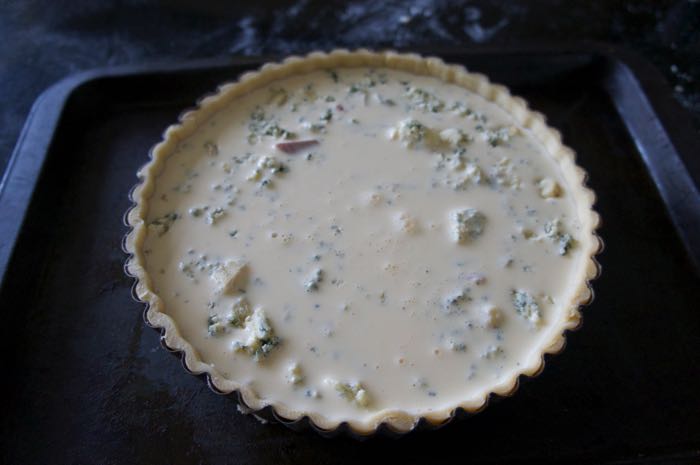 This is so delicious it is worthy of serving to guests for an informal lunch or supper, it will certainly banish any pre-conceived ideas or long-held memories of the Quiche as a limp, wet, almost white tart with shrunken bits of broccoli and chewy pastry.

It will keep in the fridge overnight but take it out at least half an hour before serving to bring up to room temperature as cold tarts do not taste of very much. I like mine just warm, after it has been out of the oven for about half an hour. Again, a tart served straight from the oven will not taste its best so it is wise to have a bit of patience, even though it is tempting to cut into that yellow, sumptuous filling to taste the first slice. 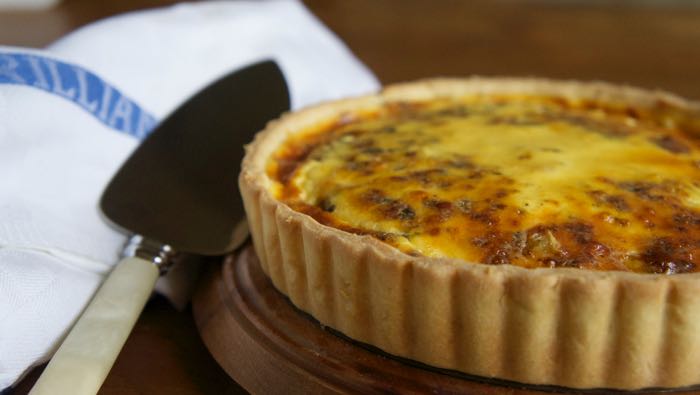 Print
HAM AND STILTON TART
Author: Lindsey Dickson
Prep time:  20 mins
Cook time:  30 mins
Total time:  50 mins
Serves: 6
You will need an 8" tart tin. Make the pastry a little while before to give it time to rest for half an hour in the fridge.
Ingredients
Instructions
3.2.2885
« OAT AND CHOCOLATE RAISIN COOKIES
QUICK COLESLAW WITH MAPLE SYRUP »