You are here: Home / Desserts / RHUBARB AND GINGERBREAD ICE CREAM 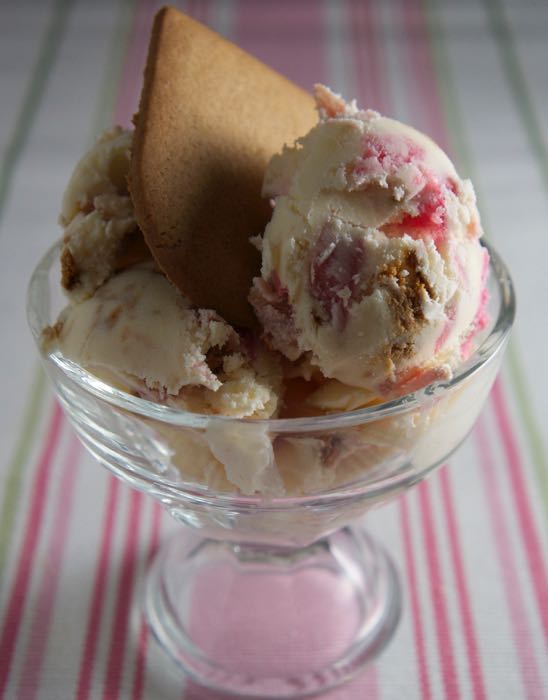 As you may know, I rather sneakily bought my husband an ice cream maker for Christmas on the pretence that he and our son are big ice cream aficionados who between them manage to devour an extraordinary amount of ice cream a week. Preferring to buy the more expensive higher quality ice creams available as they do contain real cream and tend to be natural ingredients, the boys’ ice cream habit was beginning to make a rather large indent in my purse.

Just before Christmas, a wonderful lady in Australia who I have never met, named Andrea, posted a picture of a whole load of ice creams she had made for Christmas. The varieties were mouthwatering, everything from Mango to Lemon Curd, none of which are readily available over here in England. She inspired me to make my own and so the seed was sown to buy an ice cream maker.

Such is the miracle of the internet, I put a photo of this Rhubarb and Ginger Ice Cream on Twitter and a lady in Canada asked me for the recipe. How great is that? Australia, England and Canada linking up over ice cream. I am so happy I could burst (although that’s probably due to me eating far too much lately resulting in my jeans now being a size too small.)

After a few attempts by the boys with the new gadget, their initial enthusiasm for actually making it has worn off (not eating it I should hastily add) and not unlike caring for a new hamster, it is me who has now been left with the job of making sure it gets played with and cleaned.  This is not an onerous task at all and so far I have enjoyed coming up with new flavours. Making up scrummy combinations is something all the family can contribute to and we have already have a wish list, although some of my son’s concoctions might require a little getting used to. Think Heston Blumenthal, I keep telling myself.

Cream being about £1.80 a pint in England, the ice cream it does not work out cheap compared to the standard supermarket brands but compared to the widely available high end makes such as Häagan-Daz and Ben & Jerry’s, it certainly does work out more economical and from the few first attempts I can honestly say the the quality is superb.

If ice cream is something you enjoy and is a family favourite whatever the weather outside I would highly recommend investing in a good machine, we are very happy with our Cuisinart model. It is slightly noisier than I had expected but as it only takes about 30 minutes to make a bowlful, this is not a big problem.

The machine came with a few recipes in the instruction book and after making the obligatory vanilla, we have already started to be a bit more adventurous.

I made this on a whim as I had bought some rhubarb from the market and had some gingerbread leftover from Christmas. This was the spicy festive gingerbread although I am sure normal gingernut biscuits would work just as well.

Make sure that you cut the rhubarb into very small pieces. When frozen the fruit is ‘icy’ which I quite like but if you don’t like this quality it probably would be better to puree the fruit, although then you would lose those lovely little sharp pops in your mouth. And it looks so pretty.

Hope you enjoy, let me know how you get on!