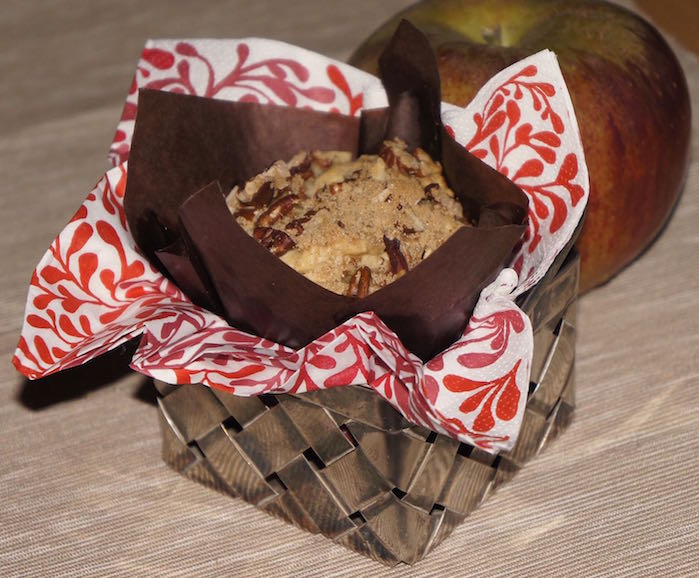 If you read my recent post an Autumn Feast from Suffolk you may have been impressed by the fantastic displays of pumpkins for sale outside various homes in my local neighbourhood. At one particular stall I remember thinking to myself the owners would be eating pumpkin until next Easter as they would surely not sell the huge piles of glinting orange orbs they had for sale by their garden gate. I bought two, intending to return for more the next day. That afternoon, a visiting friend happened to mention she had yet to buy her Halloween pumpkins so I offered her mine, one for each of her children, in the knowledge that I could pop up the road the next day and take my pick of the magnificent specimens on offer. 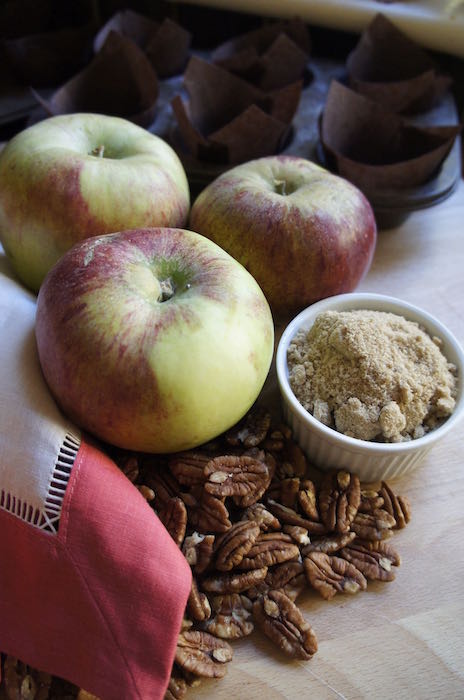 Without wishing to appear to be a party-pooper, I am one of those people that could skip Halloween without any sense of remorse or regret. I don’t like the increasingly scary costumes, some now bordering on being x-rated.  I don’t like the fact that, for what seems like weeks on end, every supermarket in the land has aisles and aisles of Chinese made tat, sold for inordinate amounts of profit. Where does all that rubbish end up? In our mountains of landfill, which scare me more than any fourteen year old in a Chucky costume. I am glad I live in a rural area where there is absolutely no chance of being tricked if I didn’t happen to have a treat handy, especially as a handful of jelly beans probably now no longer cuts the mustard. 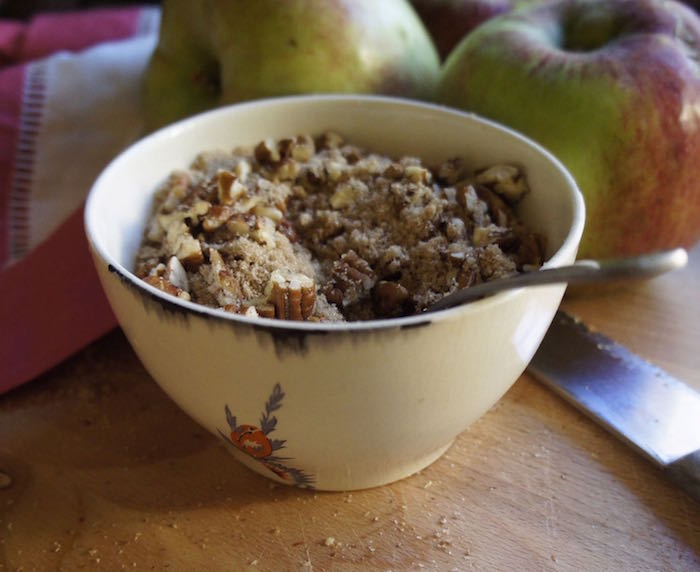 Rant over. What I really, really do like about Halloween is a pumpkin. My arty side, always itching to make or create something, gets to carve the pumpkin. My foodie side gets to experiment and cook all sorts of wonderful things with the bright orange flesh, often overlooked and underrated in the kitchen.

Roasted pumpkin soup, which I think is one of the best soups ever invented is usually first on the list, but one recipe I was looking forward to trying this year was Pumpkin Tart with Spinach and Gorgonzola which I found in Diana Henry’s Roast Figs and Sugar Snow. A wonderful cookery book that has a mouthwatering display of recipes for Autumn and Winter cooking. 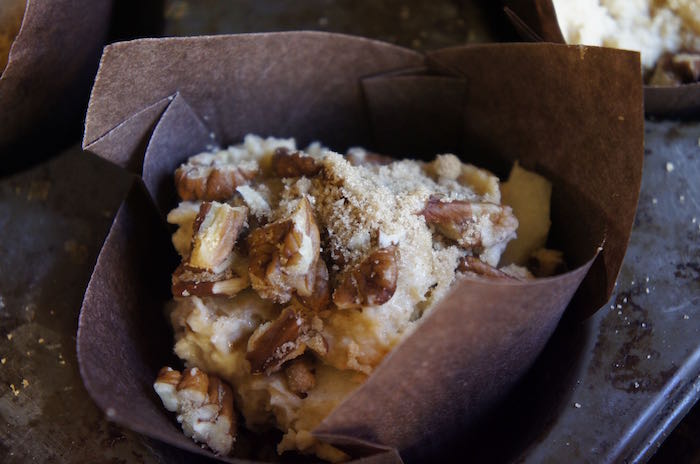 So off I went up the road with a few pounds in my pocket, intending to buy four pumpkins. One for carving (and eating the scooped out flesh), three for keeping and cooking later. Keeping ability is another great pumpkin quality,  if kept in a cool dark place they will be fine for weeks, even months.

On approaching the stall I could feel an impending sense of doom creeping up on me. Then I saw it. The awful sight actually made me take a sharp intake of breath. The wheelbarrow was sickeningly empty. No pumpkins. Surely some mistake, there were piles of them the day before. Perhaps the man in the house had taken them in overnight for safekeeping? No, they had all been sold. A trip to three further stalls had my heart sinking even further. Not just were my pumpkin tarts looking less likely to be on the menu, but now I was going to have to explain to my nine year old son there would be no scary pumpkin outside the house this year. 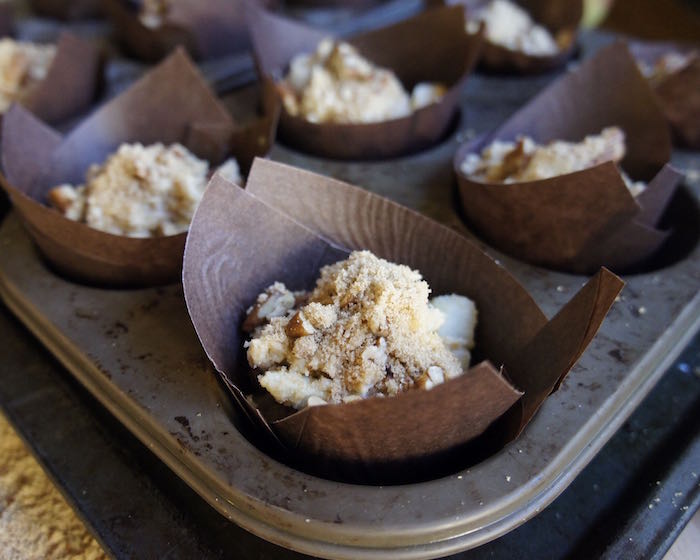 Diss, the nearest town, has a small market every Friday so I hopped in the car, still clinging on to the hope of finding a pumpkin.  If not in the market, the two supermarkets there had vast quantities of them the week before. First stop was the vegetable stall, they had a few stragglers for sale but the market man was obviously in the know about the pumpkin shortage as he was selling them for £4.00 each, a price I was not prepared to pay.

Next the supermarkets. Nothing. Nada. Zilch. £4 it was then. Yep, you guessed it, by the time I returned the market stall had sold out too. There was not a pumpkin in the whole of Diss. Empty handed and despondent I returned home. No carved pumpkin, no pumpkin soup and no pumpkin tarts. Pumpkin tears maybe.

Fed up and flicking through the Roast Figs and Sugar Snow book with the aid of a soothing cup of tea and biscuit, I came across a recipe for Sour Cream Apple Pie Muffins. A light flicked on, I had some whopping great cooking apples that needed using (a massive 500g each), the recipe could easily pass muster as a Halloween offering, the additions of cinnamon and pecans making them just right for this time of the year.

Checking off the rest of the ingredients, my spirits lifted and I got to work making the muffins. The smell of cinnamon that wafted in the air reminded me of the sudden nearness of Christmas. 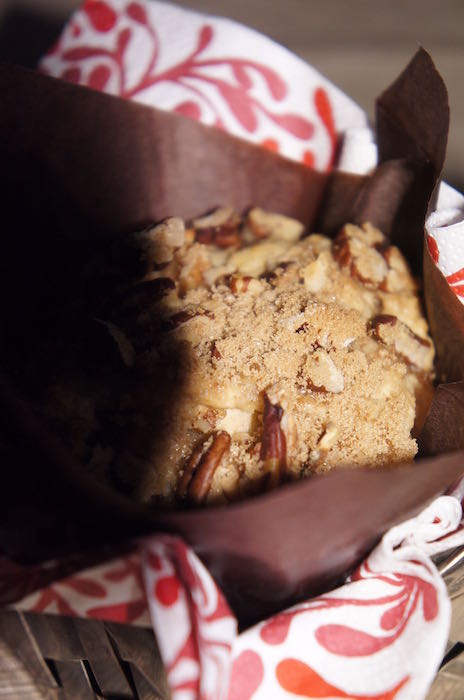 Having to rub the butter into the flour first made them a bit more labour intensive than the usual simple wet and dry mix. I was tempted to melt the butter and add it with the rest of the wet ingredients but as I was making these for the first time I thought it would be best to follow the recipe as written. The addition of sour cream was also new to me, I usually use buttermilk which I find makes a lovely soft muffin.

The recipe states the mixture makes 14-16 but I made 12 large ones (who wants a small muffin?) so they did take longer to cook than the 20 minutes in the book.

I will be absolutely honest, I have probably made thousands of muffins over the years and as I was mixing these I could tell they were not going to turn out light and fluffy. The mixture was very heavy, and even being extremely careful not to overwork the mixture, which is a muffin killer, I was not confident as I put them in the oven.

My fears where confirmed when I took the wrapper off the first one and broke into the crumb. The texture was dense and much heavier than I like in a muffin. BUT, they did have a delicious flavour, the pieces of apple were moist and the melted brown sugar inside added a wonderful toffee flavour. The baked sugary top, combined with crispy pieces of roasted pecans gave them a lovely satisfying crunch. All was not lost. 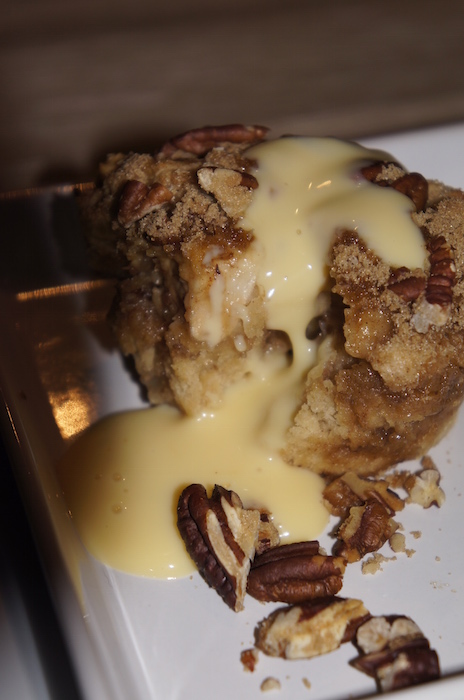 I didn’t tell the eagerly awaiting man and boy they were having muffins for dessert. Warmed gently in the oven, I served the muffins with lashings of hot custard. Both testers thought my Sour Cream Apple Pie Puddings were a great success and seconds were called for.

If anyone does make the recipe I would be delighted know how they turned out. Muffin or Pudding?

They certainly rescued my day anyway and no more was made of the mystery of the missing pumpkins. Hopefully there will be some more around next next week so I can try the Pumpkin Tarts and not have to wait another year for my much missed Roasted Pumpkin Soup.