You are here: Home / Cookery Books / FLOYD ON BRITAIN & IRELAND by Keith Floyd 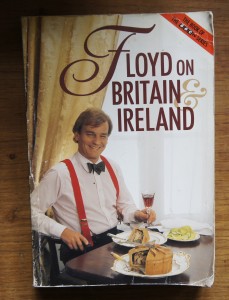 An old favourite, used mainly in the winter for its hearty and earthy recipes, this book is not for the fainted hearted and I suggest any vegetarians need to look away now. With delights such as Pig’s Head with Boiled Chicken and Mallard in a Clay Pot the book will not appeal to everyone but as soon as the leaves start to fall it makes its way to the top of our cookery pile for a few old time favourites.

This is the book containing my husband’s preferred recipe for old fashioned Steak and Kidney Pudding which he cooks and we eat, that first delve into the suet pastry, letting out the beautiful cloud of steam never fails to make be smile. It is one of those dishes best eaten for Sunday lunch on a miserable rainy day when you have nothing planned in the afternoon, just lazing around reading the Sunday papers is about as much excitement you need after such a belly full of deliciousness. Oh, and as a nod to good old Floydie it would be sacrilege not to partake in a glass or two of a full bodied red.

Another dish we enjoy is Mutton with Caper Sauce but it is so difficult to get proper mutton anywhere. I seem to remember a couple of years ago there was a campaign of sorts to bring mutton back on the menu, even Prince Charles was singing its praises but it would seem this fantastic meat, full of punchy flavour, is slowly being forgotten. Such a shame.

Tripe is now available in our local Morrisons, it is very cheap and again not eaten by enough people who can be put off by its appearance and maybe the smell associated with the extremely smelly tripe sticks given to dogs. However, I will say that having tried the traditional English way of cooking Tripe and Onions out of this book, I much prefer the Spanish style, cooked in a tomato base with chilli and pimentón.

This edition has been a companion of my husbands since it was first published in 1988 and so you could say it is definitely a keeper.